The Franchising New Zealand Survey 2017 is covered in detail below. For our report on the 2021 survey, see Franchising Counts

• The overall turnover of the franchise sector is now estimated at $27.6 billion – equivalent to 11% of New Zealand’s GDP. Add in motor vehicle sales and fuel retail and it comes to $46.1 billion.

• 72% of the franchises operating in NZ are home-grown brands.

• Almost half of all franchise disputes are now handled through mediation rather than litigation.

•The median length of time that a franchisee remains in a franchise system is 8 years.

In 2017 it had been five years since the Massey University Business School and Australia’s Griffith University published their last survey of the franchise sector in New Zealand, but it was worth the wait. The 2017 survey was the most comprehensive ever, with over 160 franchises providing detailed information on their size, turnover, fees and franchise relationships.

The results confirmed that New Zealand is the most franchised country per capita in the world, with 631 different franchise systems and 37,000 franchise units around the country. It also confirmed that the turnover of the franchise sector grew strongly since 2012, with an overall turnover of $27.6 billion compared to an equivalent figure in 2012 of $15.0 billion. That’s an increase of 84 percent over five years. And that doesn’t include motor vehicle sales ($11.1 billion) or fuel retail ($7.4 billion), which bring the total to $46.1 billion.

Let’s look at some of the questions that this survey answered. In two tables at the end, we’ll also look at how things changed since 2012, and how the NZ franchise scene compares to Australia.

The latest Survey of Franchising took place in October 2021, with results showing the resilience of the franchise sector despite 18 months of Covid - see our report here.

What are all these franchises?

In the five years from 2012 to 2017, 185 new brands have entered the franchise sector bringing the total number in New Zealand to 631.

The graph shows that the sectors with the most franchise brands are Retail (22.7%), Other Services which  includes personal and pet services, auto repairs and servicing, IT services, etc (19.8%) and Accommodation & Food Retail (18.2%) which includes fast food and coffee shops.

Most of the recent growth has occurred in the Retail and Accommodation & Food Retail categories. There have been 51 new non-food retail brands and 36 new food retail brands emerge over the past five years. This has resulted in other sizeable categories representing a smaller percentage of franchise brands: for example, Other Services has reduced 6% from 2012, while Administration & Support Services – the category which includes travel agencies as well as the robust home services sector – has dropped by a similar amount. It’s important to recognise that this does not necessarily mean that those sectors have reduced in market size; just that more new brands have entered other sectors.

The overall number of franchise units has increased massively from 22,400 in 2012 to 37,000 in 2017. Much of this increase has come from the development of new franchises, while existing franchise systems also grew internally with modest increases in the number of franchise units. One interesting change is in the number of company-owned units – units operated by the franchisor rather than by a franchisee. This has decreased by 1,100 units since 2012, perhaps reflecting the fact that some franchisors funded new units themselves and/or bought back franchise units in the troubled post-GFC period.

Where do they come from?

A lot of people think of franchises as big international brands, but the survey shows that 72% of the franchises operating in New Zealand are home-grown companies. Of the remainder, 17% operate via a local master franchisee or licensee, meaning that 89% of franchise brands operating here are locally-owned and managed.

How long have they been operating?

Many have been in business for a long time, too – some 50% of franchised brands have been operating since before the turn of the century, with a further 36% having commenced between 2000 and 2010. On average, franchisors have 25 years of operational experience and 17.5 years of franchising experience.

How big are they?

Franchises by number of units

How much do they cost?

For the potential franchise buyer, one of the most important questions is always, ‘How much does a franchise cost?’ The survey helps to answer this by exploring both fees and overall start-up costs. Buyers should bear in mind, though, that it’s what they get for their money that counts – not whether a franchise is charging more or less than the average.

97% of franchises charge an initial fee, with the median fee for retail formats being $35,000, slightly above the $28,750 charged by non-retail franchises.

As you would expect, total start-up costs show considerable variation depending on format and sector. The median start-up cost (excluding GST) of a new retail franchise is $308,500, compared with $87,550 for non-retail franchises. Retail (including food) franchises are significantly more expensive due to higher inventories, fit-out costs, equipment and initial working capital. The full survey report offers a helpful breakdown of where the money goes for both retail and non-retail options.

What training is provided?

This is another important area for franchise buyers – how much training will they receive in operating their chosen business? Again, this varies enormously according to sector, with some businesses requiring more training than others. It’s also important to differentiate between direct initial training and the more indirect training that might come from, say, on-the-job experience before or after commencement, or from ongoing visits from support staff after opening.

On an ongoing basis, established franchisees can also expect to receive a median 20 hours of direct training per year.

How long do franchisees stay?

Just as people buy franchises for many reasons, so they have many reasons for selling: family issues, health, other opportunities and burn-out, to name but a few. Generally, however, as the researchers note, the length of time that franchisees stay is a signal of the stability of the franchise system.

Franchisors reported that the median length of time that their franchisees remained in the system was eight years. Given that a typical franchise agreement has a term of five years, this suggests that most franchisees extend their agreements to a second term before exiting the franchise.

How many units do franchisees buy?

Number of multi-unit franchisees in a system

Where do franchisees come from?

In 2015, a report suggested that some 68% of purchasers of existing franchise businesses are people who have immigrated to New Zealand within the last five years, predominantly from mainland China or India. That’s not so true for franchise start-ups, which often require franchisees to have considerable communication skills and a knowledge of the local market to establish their new business, but with immigration driving New Zealand’s GDP growth, it was an area worth investigating in the survey.

Although most franchisors (73%) reported that they had not actively sought to recruit migrant or ‘new Kiwi’ franchisees over the past five years, over half (52%) reported between 51% and 100% migrant ownership. The most common countries of origin were China (64% of franchisors), India (64%), South Africa (36%) and the United Kingdom (32%).

Meanwhile, 67% of franchisors reported that NZ Maori owned units in their franchise system. Of these systems, just over half indicated that Maori comprised between 1% and 10% of franchisees, with 12% of respondents having between 11% and 20% of Maori as franchisees.

How satisfied are franchisees?

Of course, little disagreements and disputes are normal, but what matters are the substantial ones. The 2017 survey asked franchisors, ‘In the past 12 months has your brand been involved in any dispute with a franchisee that involved external advisory assistance?’

The results found that only 1.9% of franchisees had been involved in a substantial dispute in the last 12 months. This is an impressively low figure although, given that there are 37,000 franchise units in New Zealand (some owned by multi-unit franchisees), this would still mean that there are a few hundred disputes every year. That explains why 22% of franchisors indicated that they had been involved in a dispute with a franchisee that required resolution from an external party. Almost 78% of franchisors had no disputes that required outside intervention.

How disputes are handled

A very positive trend is that almost half of all substantial disputes were addressed through mediation, with litigation being required in just 10% of cases. Mediation is faster and cheaper for both parties, which is important in the speedy resolution of commercial disputes, and is a required option for franchises which are members of the Franchise Association of New Zealand. 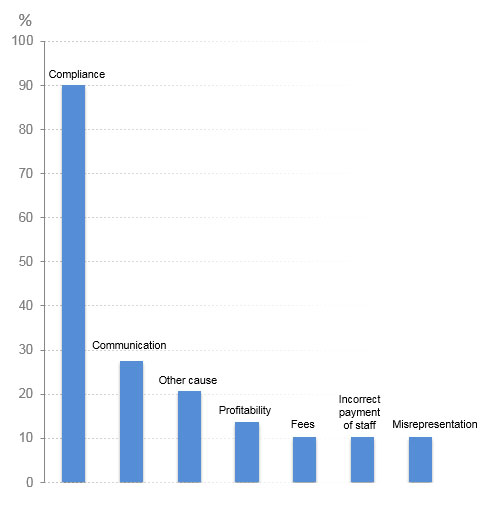 By far the most common cause of substantial disputes was compliance with system requirements – whether the franchisee is following the franchise system properly (90%). This was followed by communication problems (28%). Profitability caused disputes amongst just 14% of the respondents, followed in equal proportions of 10% related to fees, incorrect payment of staff, and misrepresentation issues. Incorrect payment of staff is a major concern for franchisors following the recent scandals involving 7-Eleven and some other well-known brands in Australia.

What else does the survey cover?

This article provides a snapshot of the main findings of the Franchising New Zealand 2017 survey. The survey contains more detail on many of the above areas, as well as specialist sections on the following areas:

The full report can be viewed at https://www.franchiseassociation.org.nz/franchising-survey-2017/

Franchising New Zealand 2017 shows that the New Zealand franchise sector has grown and performed strongly in the robust economic environment that has prevailed over the past five years, say the survey authors. ‘Brand numbers have increased and systems have grown internally in unit size. Sales turnover has increased substantially with further growth forecast into 2018 and 2019. Franchising offers employment opportunities for increasing numbers of people, and full-time positions have risen.

‘The survey provides evidence of a strong, experienced sector riding the wave of an upbeat national economy.’

A total of 631 franchise brands were confirmed, and 161 usable responses were received from an online survey, resulting in a response rate of 26.8%. This is an excellent response rate for a business-related survey.

The survey was sponsored by ASCO Legal, The Franchise Coach, Franchize Consultants, Hayes Knight and Westpac, with support from Franchise New Zealand.

It's also interesting to look at how the figures for 2017 compare to the last survey in 2012, and how some of the key data from New Zealand compares with Australia.

The 2017 survey was conducted by the same team using the same methodology as the Franchising Australia 2016 survey, enabling some direct comparisons. Similar statistics are not available for the USA: however, there are believed to be some 2,000-3,000 franchise systems there and around 700,000 franchise units (1 per 467 people).