The 2021 Franchising New Zealand survey conducted by the Massey University Business School has demonstrated not just how resilient franchising is, but how important the sector is to the New Zealand economy.

Sales through franchised units are estimated to be a massive $36.8 billion – equivalent to a remarkable 12 percent of our GDP – and this figure doesn’t include motor vehicle or fuel retail through franchised outlets. Add those in, and the total comes to $58.5 billion.

The survey has also confirmed that New Zealand is still the most franchised country in the world. Following are some of the highlights.

Any business survey that covers the period from April 2020 to March 2021 is going to face some interesting challenges. That was never the intention, of course – the original timing was March 2020, three years after the 2017 survey. With the whole country going into lockdown that month, however, the survey was postponed as franchisors focused on helping their franchisees cope with the unexpected.

As it was, the financial year covered by the survey included 43 days at Level 3 or 4 for the whole country, and 68 days in Auckland – almost one-fifth of the entire year. Under those circumstances, and given the massive challenges in accommodation, travel and hospitality, franchising has performed remarkably strongly.

The ongoing nature of those challenges during October 2021 did impact on responses. This year, 96 franchisors responded compared to 161 in 2017. This smaller sample base inevitably impacts upon the ‘big picture’ results extrapolated from the responses, although within the sample the figures can be regarded as representative.

What do all these franchises do?

The Massey University researchers identified 590 franchise brands operating in New Zealand. Analysis of these brands shows that the sectors with the most franchise brands are Retail (18 percent), Accommodation & Food Retail (14 percent) which includes fast food and coffee shops, and Administration & Support Services (13 percent) which includes the home services sector (including home cleaning and lawnmowing). The percentage of franchise brands in the Construction category (15 percent) has trebled since 2017. This includes home building and renovation, the trades, installation, maintenance and landscaping.

If you’re wondering about the categories, by the way, the Massey researchers use the ANZSIC industry classification system which allows accurate comparisons to be made with other surveys both here and in Australia.

Where do they come from?

The origin of franchises operating in New Zealand

Franchising isn’t all about big international brands. Over 70 percent of the responding franchises operating in New Zealand are home-grown companies, with a further 21 percent being operated by locally-owned companies under a master franchise or licence arrangement.

How long have they been operating?

Few Kiwis had heard of franchising in 1990, with just 12 of the respondents having commenced franchising before that date. Over the next twenty years, though, that number grew massively as New Zealand caught on to the potential that franchising offered. As a result, 80 percent of the franchises in the 2021 survey have been operating for more than ten years, giving them an enormous amount of experience.

How big are they?

Franchises by number of units

The Massey report shows that there are an average of 51 franchise units per system. What do we mean by ‘unit’? Well, franchising is very varied, so a unit might be a shop, a café, a home-based business or a ‘man and a van’ mobile operator.

This means the number of units will vary enormously according to the type of business the franchise operates: a lawnmowing franchise might have hundreds of franchisees; a signage franchise could have national coverage with just 25. For this reason, the researchers look at the median (the mid-point of the responses received) rather than the average. The median in Retail-based franchises was 23 units per system; in non-retail it was 24.

Where are they all?

Franchise businesses come in all shapes and sizes, and operate in all sorts of ways, as the above chart shows. The above shows the location for all respondents; however, the detailed report shows that, as you’d expect, retail is heavily dependent on a branded location (93 percent), while food service offers 70 percent location, 10 percent sign-written vehicle (ie. not UberEats) and 20 percent from both location and vehicle.

For the potential franchise buyer, one of the most common questions is always, ‘How much does a franchise cost?’ The survey puts this question in perspective: it found that total start-up costs vary between $1 and $1 million. After all, it’s what a buyer gets for their money that counts, not whether a franchise is charging more or less than the average.

More importantly, the survey also looked at the amount of training a new franchisee receives.

Training needs will, of course, vary according to industry sector – the median figure was 14 days. In addition to initial training, most franchisors are providing 21-50 hours of direct training per year to established franchisees, plus 12 days of general ongoing support. 98 percent of franchisors reinforce employment best practices and compliance in their formal franchisee training.

Talking of employment, the total number of people employed in New Zealand business format franchises is an estimated 156,820 including full-time, part-time and casual employees and contractors.

How many units do franchisees buy?

Number of multi-unit franchisees in a system

How satisfied are franchisees?

Of course, little disagreements and disputes are normal, but what matters are the substantial ones. The survey asked franchisors, ‘In the past 12 months has your brand been involved in any dispute with a franchisee that involved professional external advisory assistance?’

The results found that only 1.33 percent of franchisees had been involved in a substantial dispute in the last 12 months. This is an impressively low figure although, given the number of franchise units in New Zealand, this would still mean that there are a few hundred disputes every year. That explains why 18.8 percent of franchisors indicated that they had been involved in a dispute with a franchisee that required resolution from an external party.

81 percent of franchisors had no disputes that required outside intervention.

As in previous surveys, by far the most common cause of substantial disputes was compliance with system requirements – whether the franchisee is following the franchise system properly (78 percent). This was followed by communication problems, misrepresentation issues and profitability, all on 22 percent (multiple causes were recorded in some cases. Profitability is an understandable concern given the pandemic conditions (there's a special section on the impact of Covid in the full report). It's also worth noting that of those disputes reported, very few (6 percent) ended up in actual litigation.

How disputes are handled

Where do franchisees come from?

The closing of New Zealand’s borders not only damaged our tourist industry: it also affected the ability of many businesses to find suitable staff, and of franchisors to find new franchisees.

The survey asked the question, ‘As a franchisor, do you actively recruit migrants or new Kiwis as franchisees? ‘New Kiwis’ was defined as people who had arrived within the past five years. 36.5 percent of franchisors replied ‘yes’, with a further 2 percent planning to do so in the future.

With the growing maturity of many franchise systems, the average age of franchisees has also increased – partly because, in many cases, franchisees have kept their businesses for 10 years or more, partly because of New Zealand’s ageing demographic, but also because the variety of franchises available has increased enormously since the first-ever survey in 1997. As the baby boomers head towards retirement, this will open up more opportunities in established franchises.

This article provides a snapshot of the main findings of the Franchising New Zealand 2021 survey, which was conducted by a research team from Massey University Business School. The authors are Dr Jonathan Elms and Simon Moore.

A total of 590 franchise brands were confirmed, and 96 usable responses were received from an online survey, resulting in a response rate of 16.3 percent.

The full report can be viewed at https://franchiseassociation.org.nz/survey-results/

See key statistics and graphics from NZ Franchising Facts 2021 below. 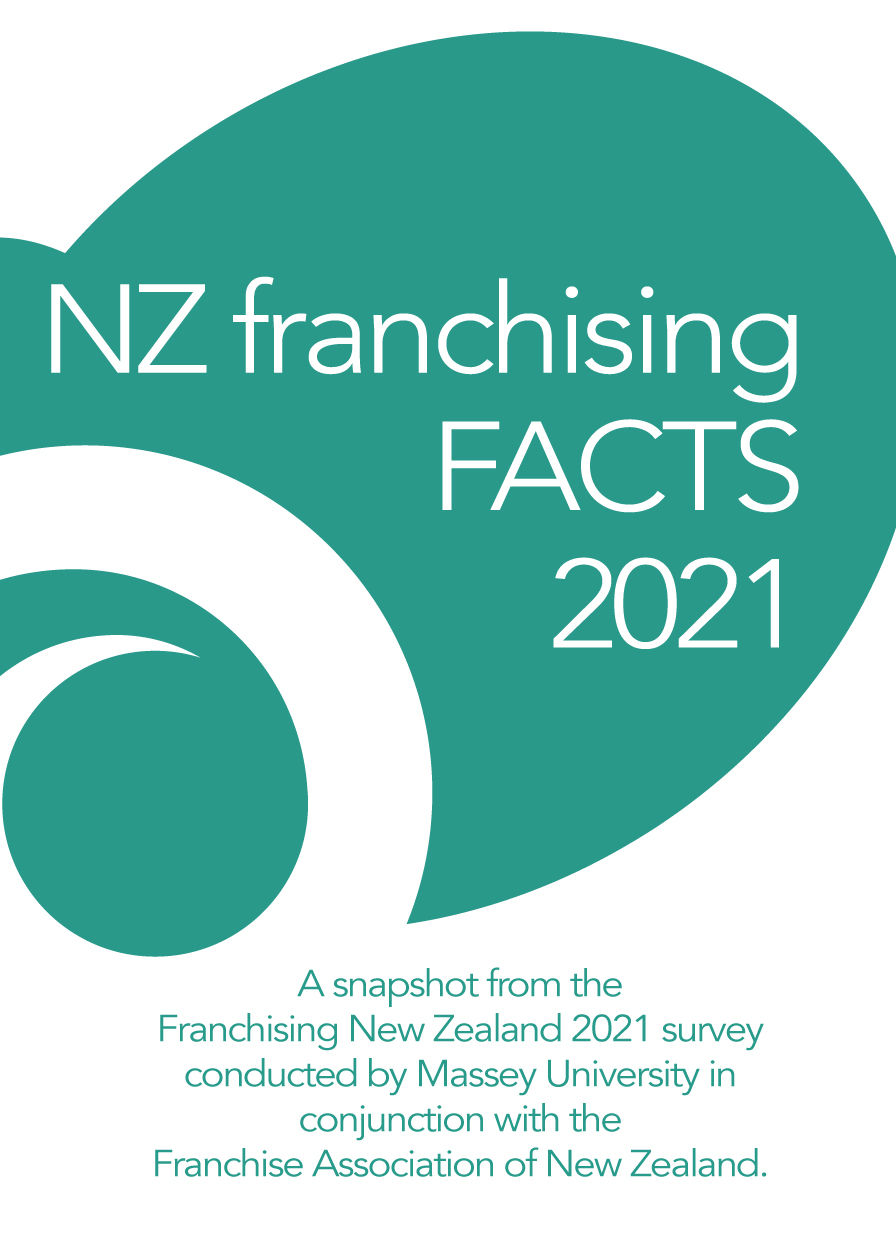 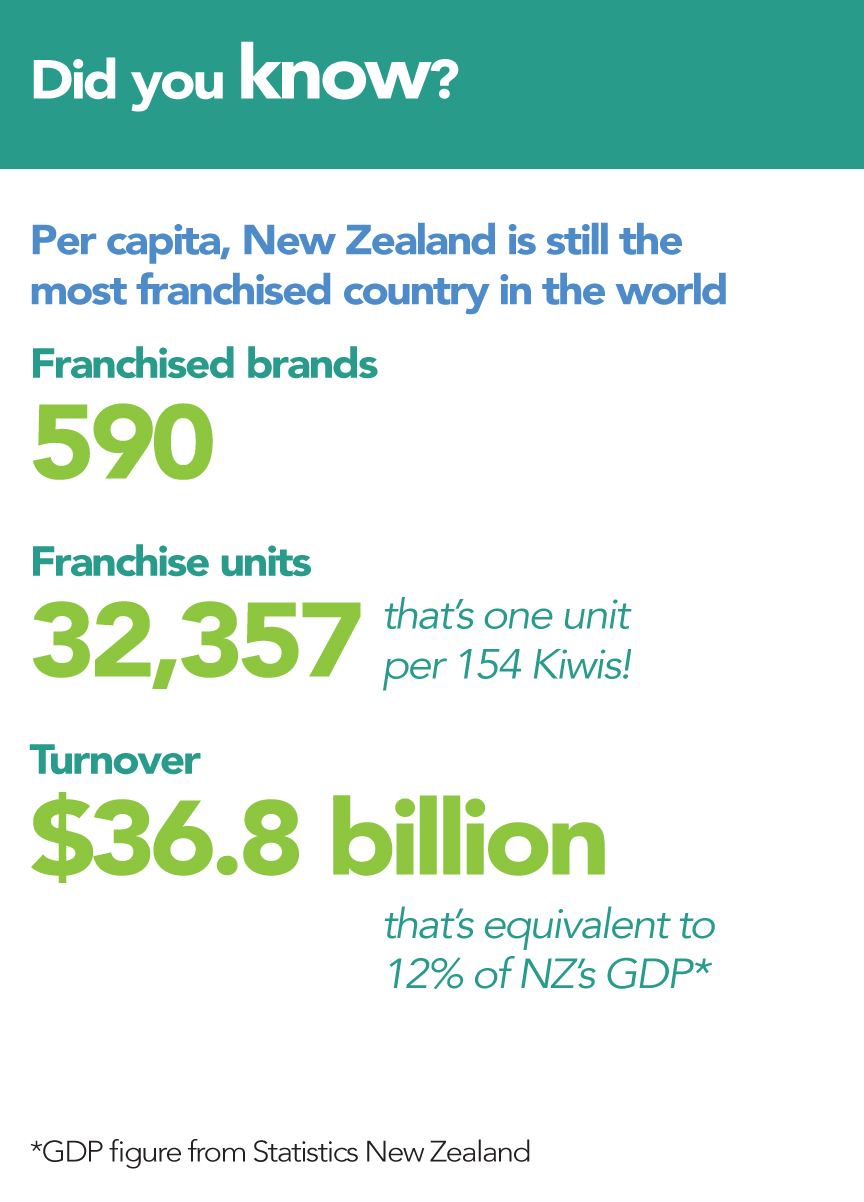 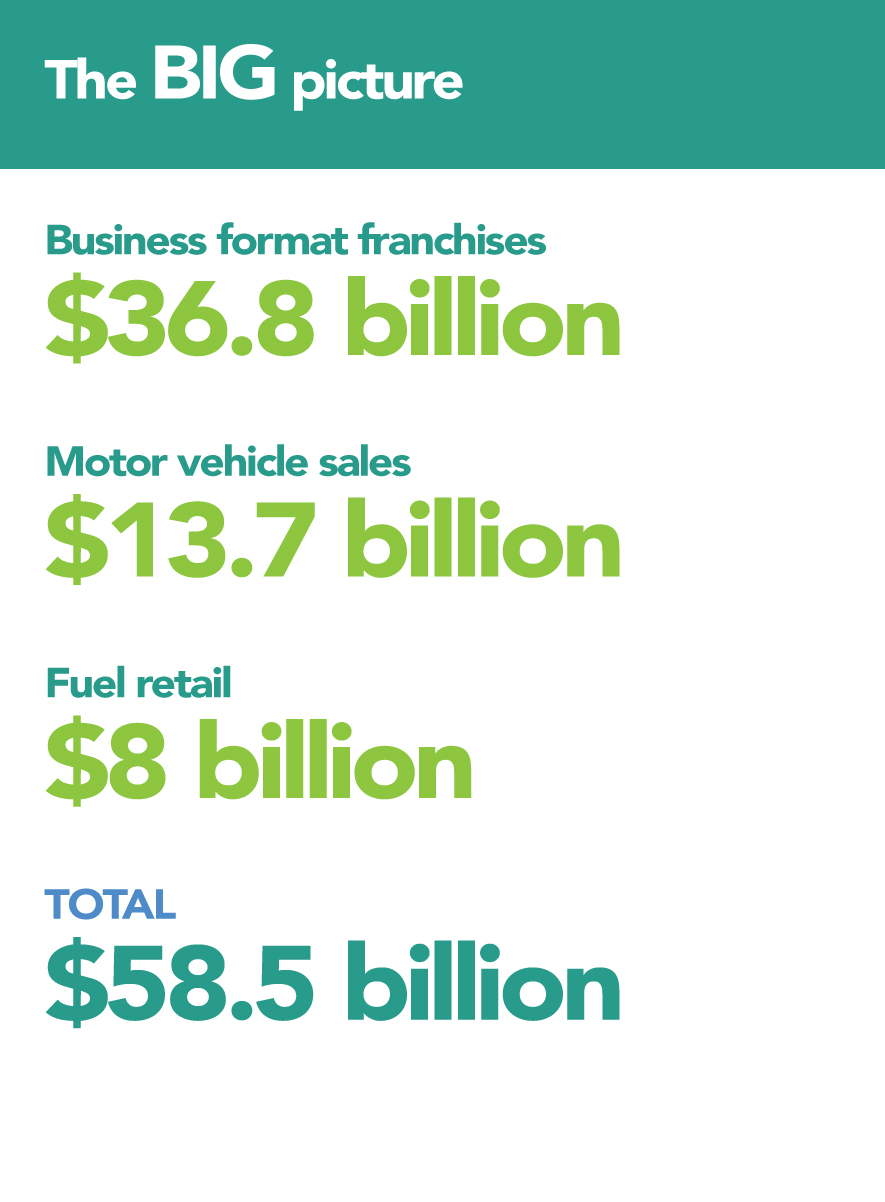 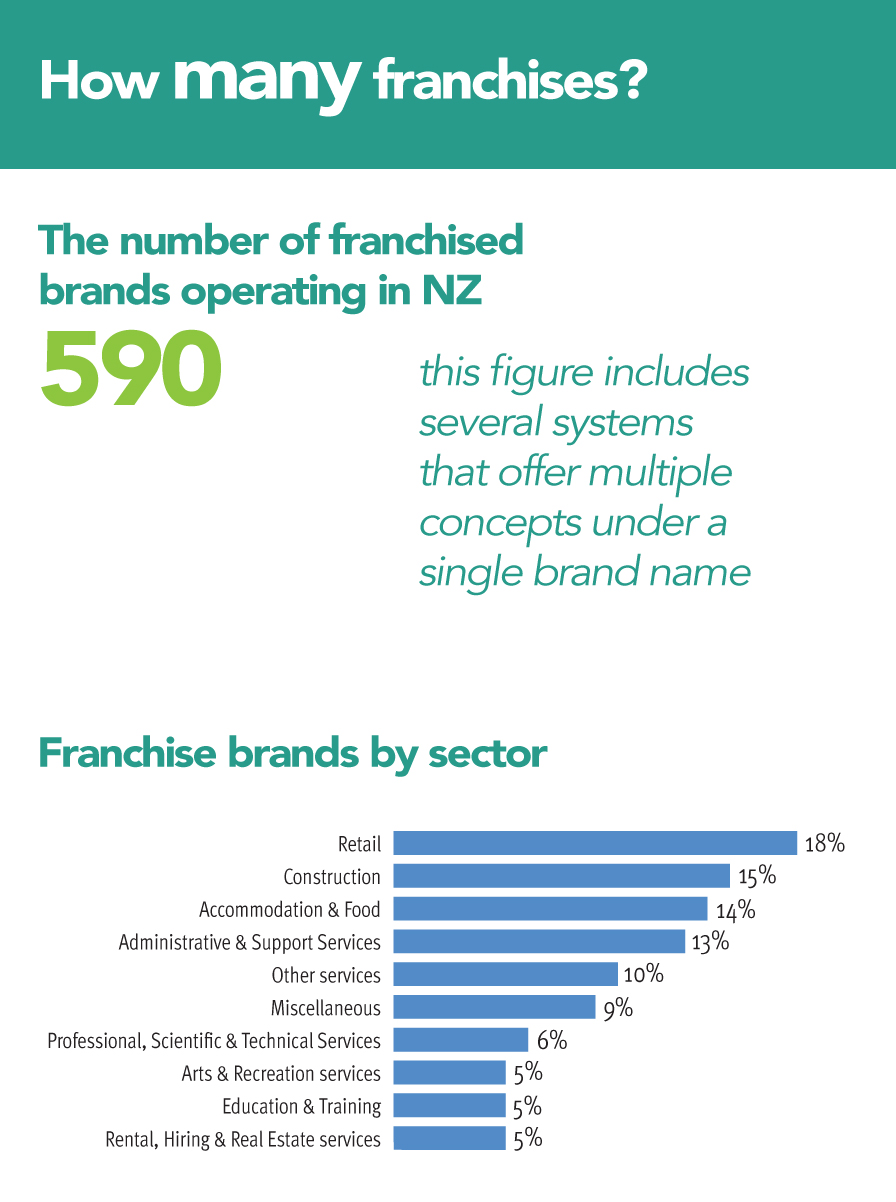 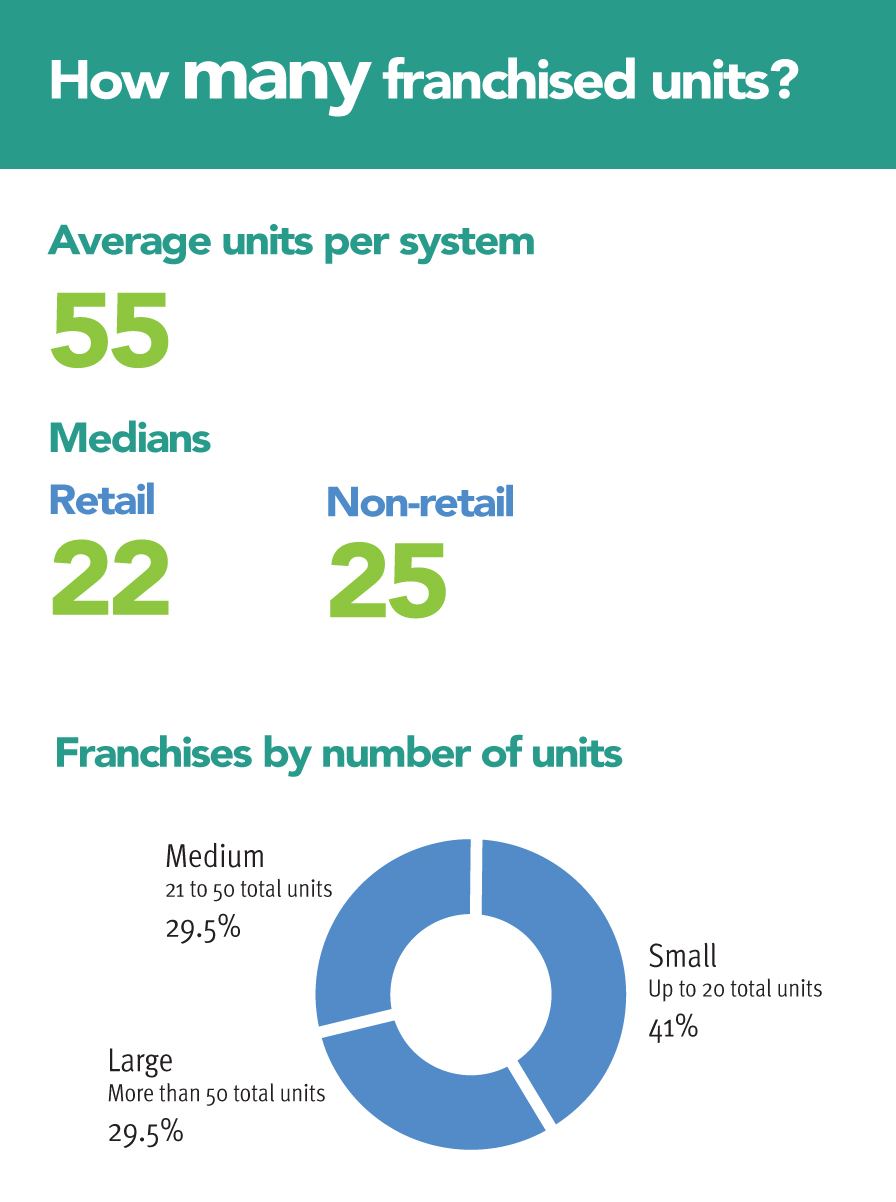 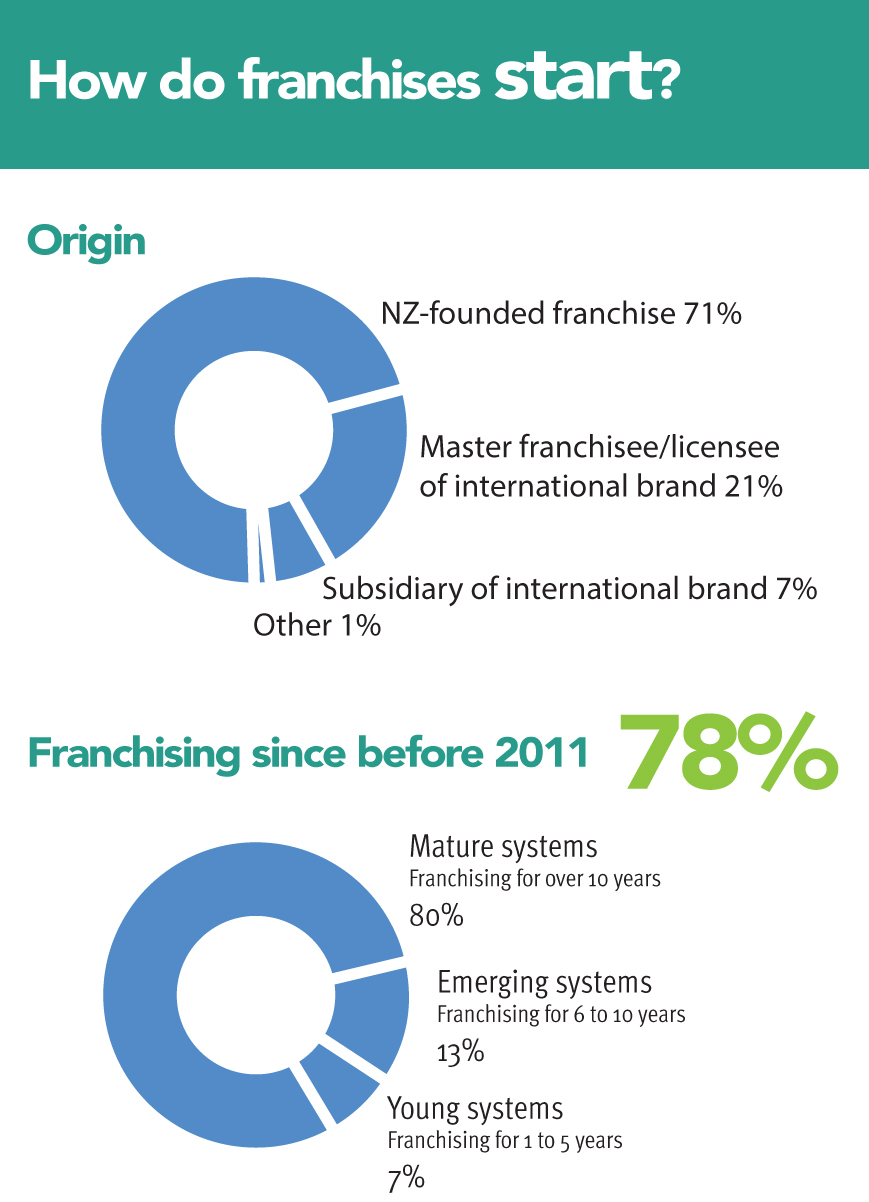 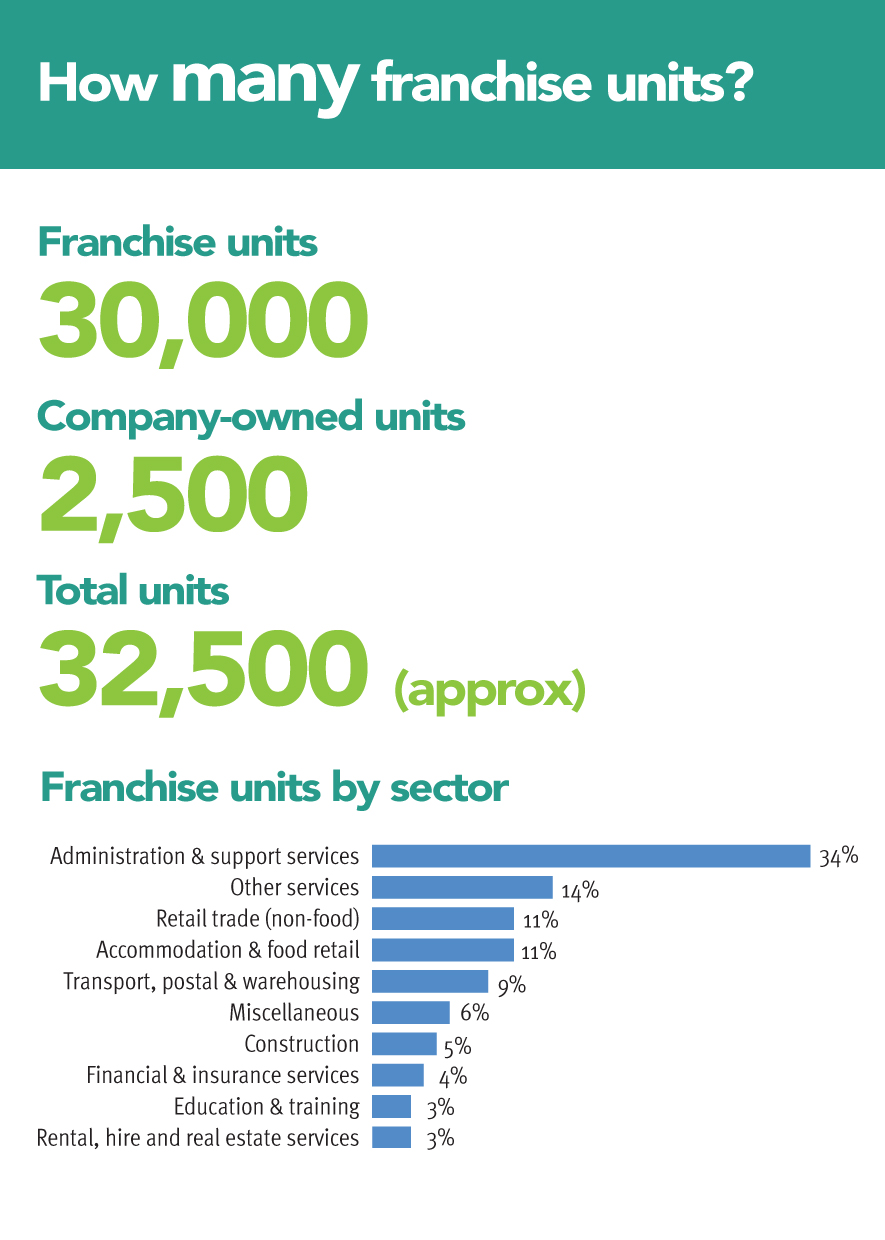 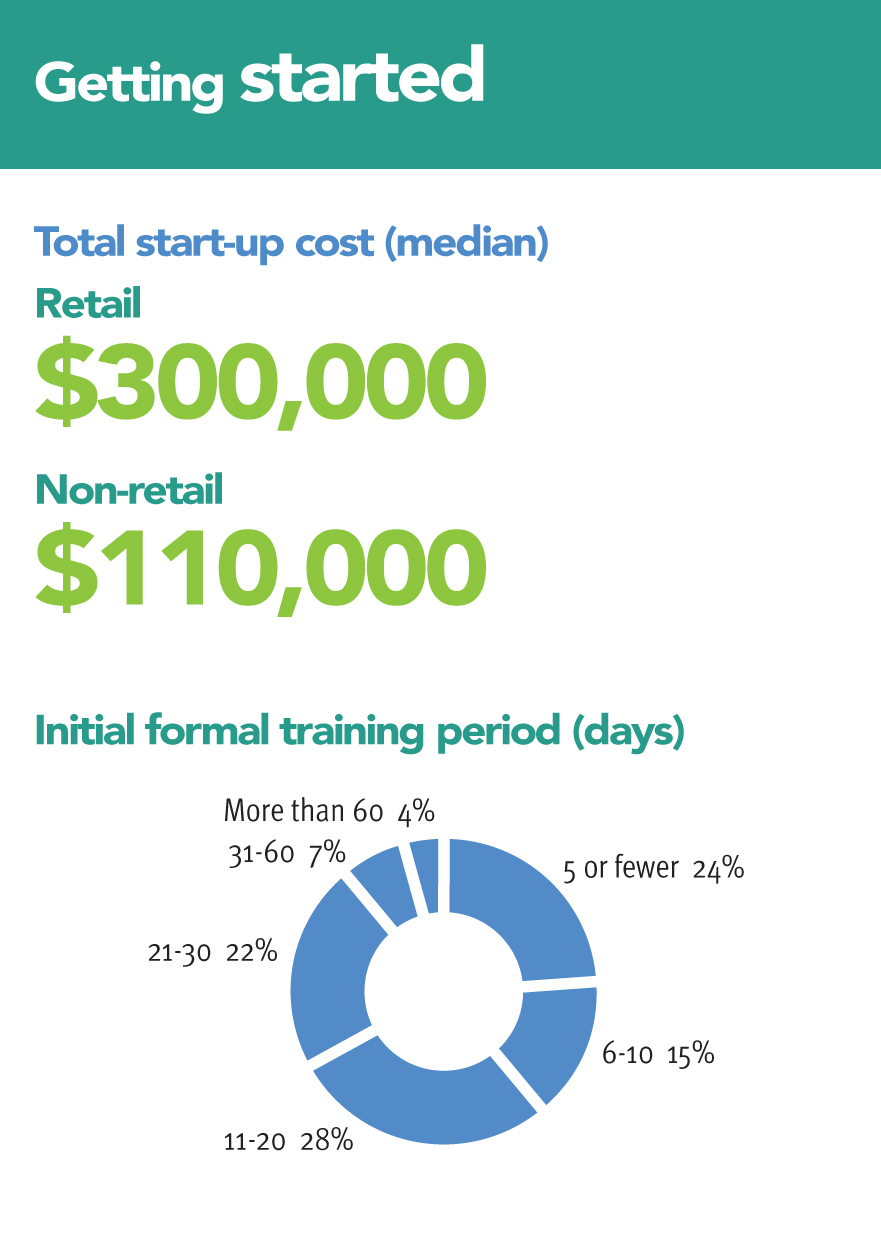 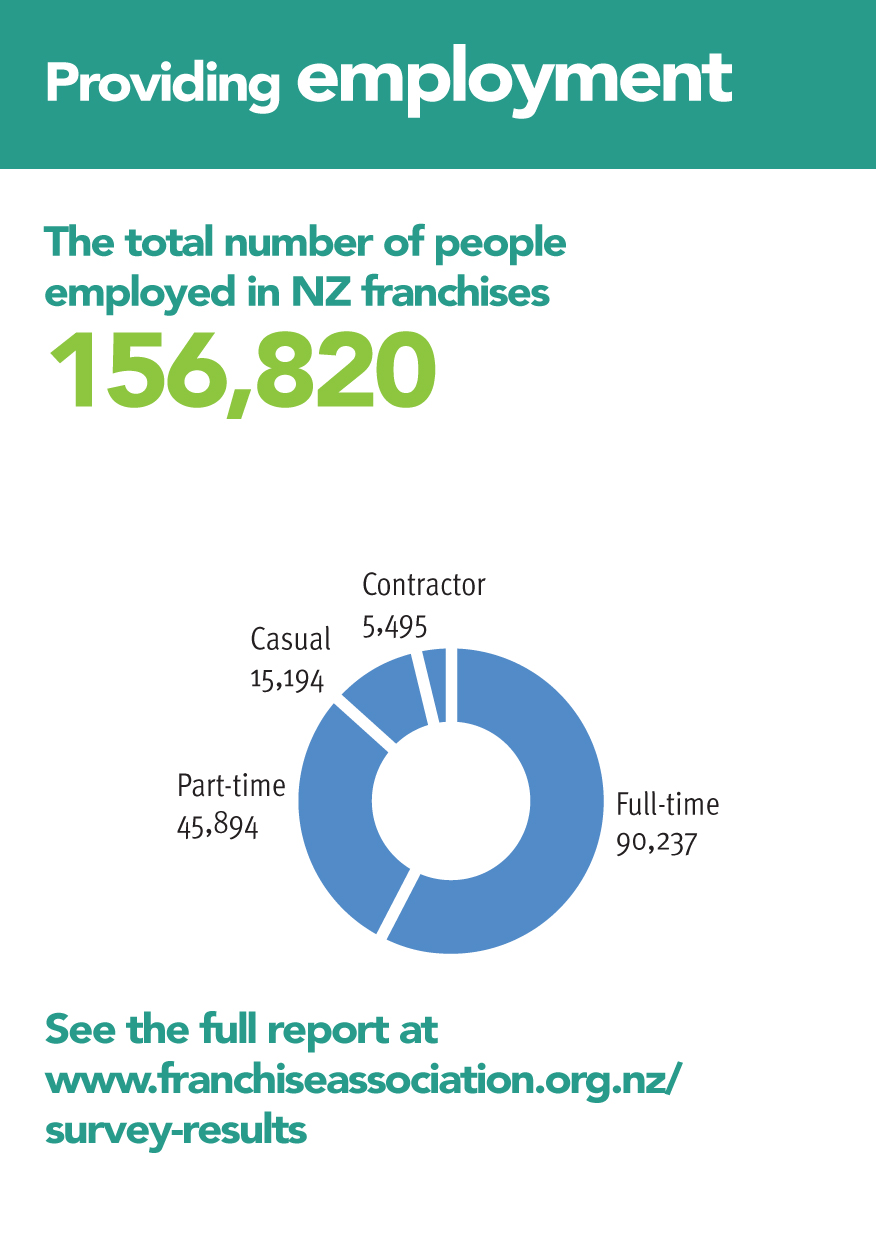 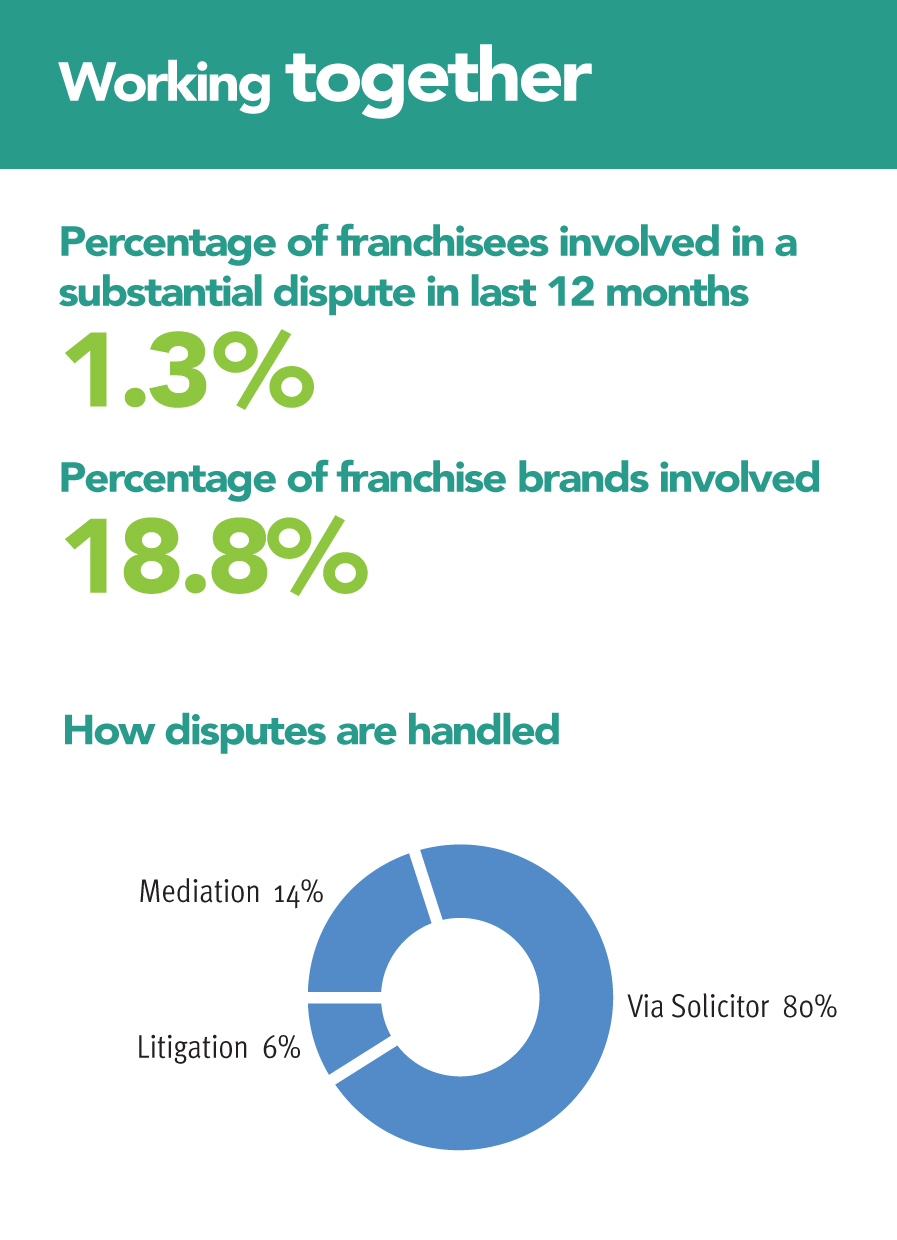 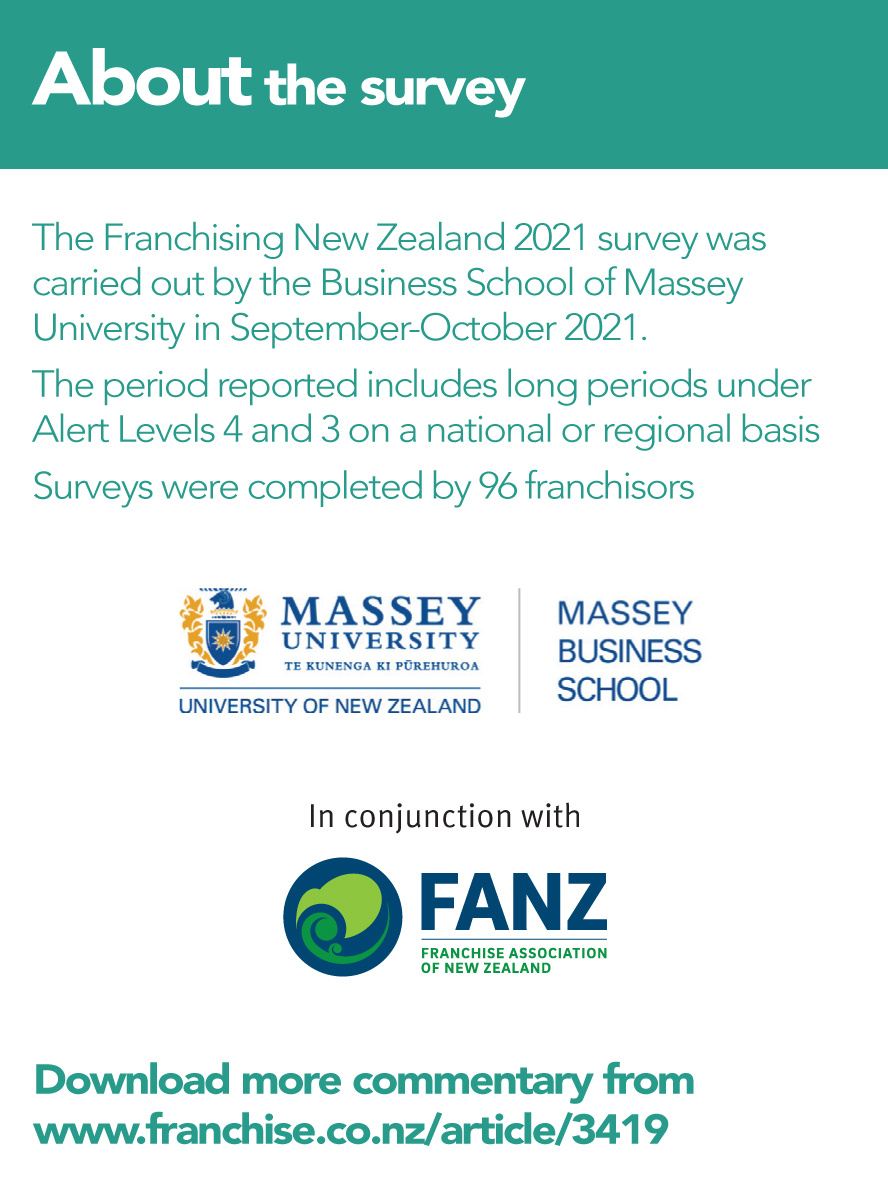 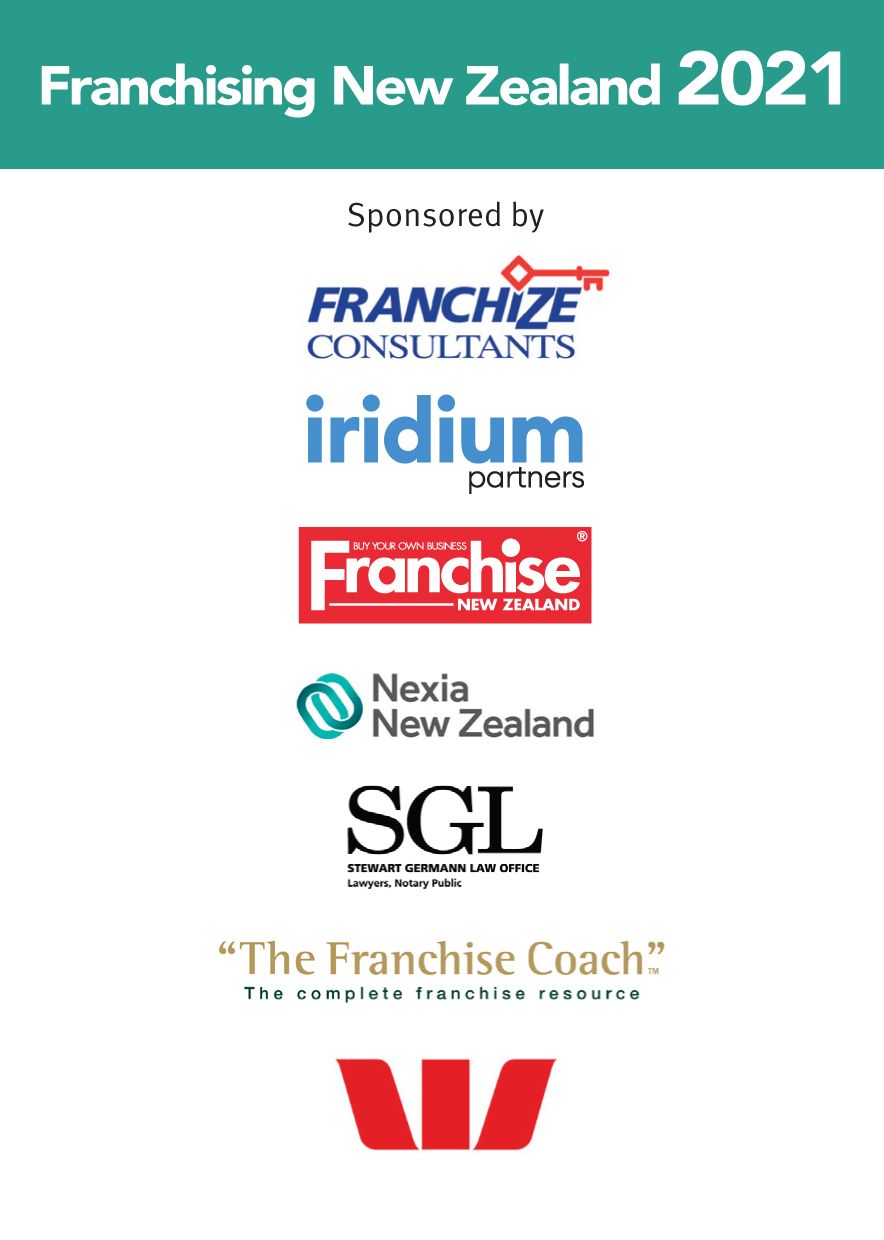 At Caci we love what we do! Helping New Zealanders with what we call 'skin confidence'. Now is your chance to join the team, become a Caci clinic owner...