Experiencing the earthquake - one franchisee's story

March 2011 - Gary Tempero is a Provender franchisee in Christchurch who wrote this account of the day the earthquake struck for the franchise’s newsletter. It is reproduced here to give an impression of how not one but two typical franchisees and their family have been affected.

On the morning of 22nd February, I filled up eight of my vending machines in the Christchurch CBD and then headed to the bank. After leaving the bank (four blocks from the CBD), I was sitting at the lights when my van started to move. My first thoughts were “What? It’s not windy,” then my van started to bounce across the road. At this point, I knew all too well what was happening. Then the dust started to rise from the CBD.

I phoned my wife Bridget immediately (this was to be my last call for about four hours) as I was driving towards my youngest son’s (Riley, 11 yrs) school. During this drive there were buildings falling on either side of the road. At the school they were all out on the lawn safely with no damage to the school. We found my eldest son, Matthew (15 yrs), had been let out of Shirley Boys High School at 12pm for a teachers’ union meeting and he was at the bus stop waiting for a bus when the quake hit. The bus never arrived. His school was 10 kms from home so he stayed at a friend’s house for a while then walked home, arriving at 8pm. During this time we got a few texts through to him, but some were taking hours to arrive. 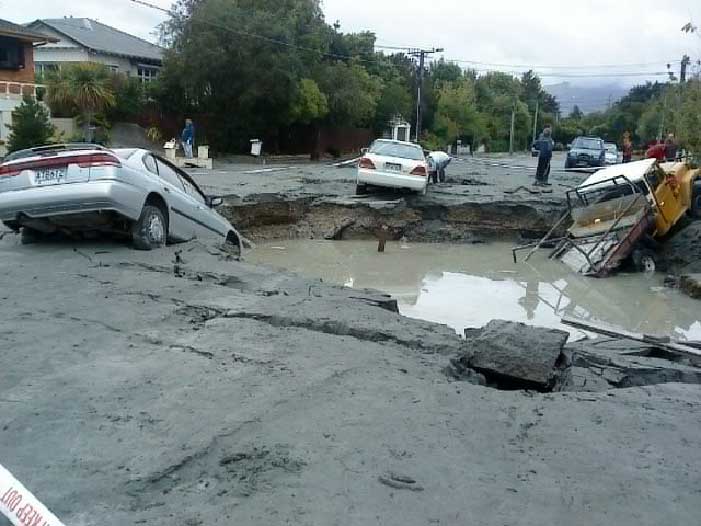 My daughter Grace (13 yrs) was at school in the CBD just one block from the square. I didn't rush there immediately as my first thought was that she was in a building only two years old, so should be ok. How wrong I was – she was across the street in another building I didn't know they used. At the time of the quake, she was in the stairwell of an old building at third floor level. Teachers kept the children on the second floor until the shaking stopped then moved them outside. Another child’s parent was there already and walked them home, about four kms. Grace had to walk down Manchester St to exit the CBD area, and I am sure that you have seen the pictures of what it was like there. Thankfully, she can't remember anything of the quake or the walk home.  It took her three hours to get home and again we got texts through to her, but it all took time.

Bridget, who has a Jim’s Lawnmowing franchise, was mowing the lawn of a customer at the time. Water pipes and sewerage pipes broke immediately and the water was halfway up Bridget’s tyres within minutes. She got home in about two hours. No more texts from me to her got through within this time.

All this time my parents were watching on TV knowing that all five of us would be different parts of the city and their granddaughter right in the middle. My first call to them got through at about 6pm.

So we were all safe and well – but shaken! Now, Grace is in Timaru with a friend, Riley is in Oamaru with grandparents and Matthew is at home sleeping in each day…

The quake of Sept 4th had left us with cracks in the gib and books off the shelves. This time, there are no new cracks in the gib but we do have cracks in the foundations. The house is still safe and all repairable but the shaking caused pictures to fall, all our crystal to fall and break (wine in plastic cups only for the time being L) and  my ice cream freezer to defrost: currently, the kids in the street think I am the best! That night, it was sandwiches by candle light and a long drop outside. We got power on Wednesday sometime, water back on Friday (but very low pressure). Cold showers are the norm at present, although we did drive to a friend’s house in Rangiora for a long hot shower last night.

I have eight vending machines in the CBD or cordoned-off area. They are all full of stock and it is unknown at present if they are damaged or upright. I also have 14 snack boxes in the area and aeround another 40 at schools, day care centres and banks that are closed. I’m guessing that about 40% of my customers are off-limits at present. That may increase as customers outside the CBD realise that their building or business is no longer viable. Bridget has also at present lost 70% of her client base at Sumner and Redcliffs: she has received texts from customers saying that they no longer have lawns or garden due to the rock slides in that area.

Going forward, this time we get some relief from the government – there was none last time for us small operators. So we are alive, well and capable of moving forwards in due course.

THANK YOU to all at Provender for your thoughts, texts and emails. A special thank you to Philip and Steph [Horrocks, the Provender franchisors] for their financial offerings in the newsletter last week. As of last night, Bridget’s franchise has said that they will get back to us – that’s after I emailed the franchisor himself in Australia asking if franchise fees could be suspended. Two franchises - one outstanding in their support, one useless!!!!!!

That was our day. Obviously, others have been affected much worse than us, this is just my story.

Do you have stories of how you, your family and your franchise fared after the quake? We'd love to hear from you.

Read how franchises responded to help franchisees after the September 2010 quake.

Download the support kit for franchisees hit by disaster.