Daniel Cloete is one of the best-known faces in New Zealand franchising, having been Franchise Manager for Westpac since 2000 and leading its highly-effective franchise team as National Franchise Manager since 2003. During this time he has played a massive role in the franchise sector. He has overseen Westpac’s involvement not just with FANZ itself but with other key activities in the sector, including Franchise New Zealand media, the Franchising New Zealand survey and, of course, the Westpac New Zealand Franchise Awards.

Prior to joining Westpac, Daniel worked in the United States, Spain and South Africa. He also has a background in franchising, having owned two franchised operations with a business partner and trialling the first BP Express franchised store.

Presenting him with Life Membership of the Franchise Association, FANZ Chairman Dr Callum Floyd said, ‘Daniel is widely recognised as being not only a long-standing and respected banker in franchising; he is also a leader fostering the development of a successful wider franchising sector. Daniel has contributed to franchising as a whole through his hosting of events and workshops (including supporting the visits of overseas experts); and through his gently bringing together those in need of advice with those who can best advise them.

‘During this time, Daniel has formed many highly supportive and respected relationships with numerous growing and mature franchise networks in New Zealand. As one franchisor noted, Daniel has been a fount of knowledge through his extensive understanding of current, future and international franchise markets. He has a big picture view of franchising, understanding both the possibilities and challenges, and gives wise counsel. As one of his supporters for Life Membership stated, Daniel is a man of personal integrity, honest and upfront in all of his dealings.’

Daniel has also given freely of his time to support FANZ and is a regular attendee at franchise events, often with his wife Nicoleen. In addition to sitting on the Board for some years, he has been a vital and valuable member of many committees, which continues to this day.

‘FANZ is proud to recognise the contribution which Daniel and Westpac have made to the franchise sector by making him a Life Member of the Association.’

Franchise New Zealand is delighted to add our own congratulations to Daniel on this well-deserved honour.

The other Life Members of the Association are: 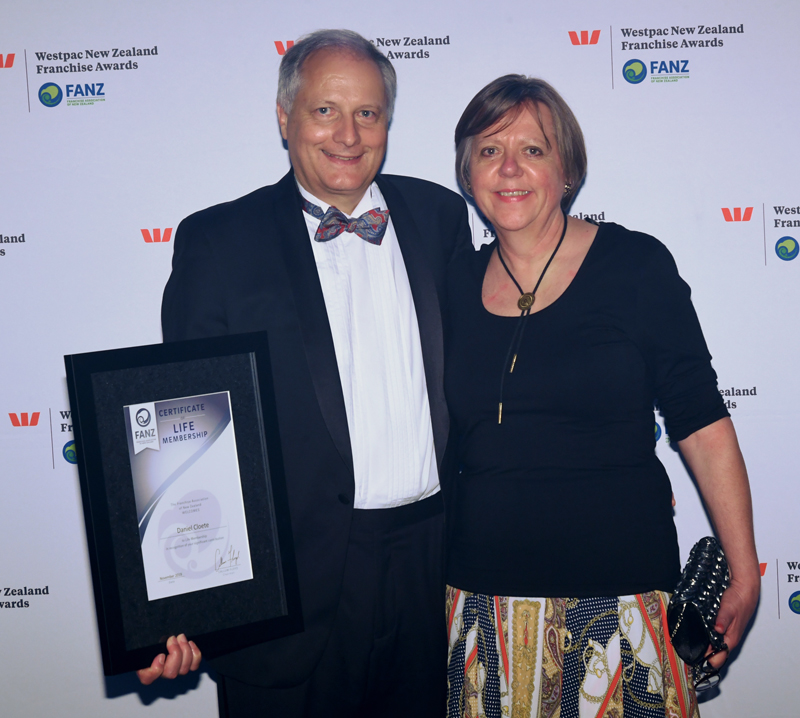