REWRITING HISTORY – and what’s to come for our economy?

20 February 2018 - The latest Quarterly Economic Overview from Westpac deals with ‘lies, damned lies and statistics’ after Statistics NZ revised its estimates of GDP going back several years. But what's next?

The good news in the latest Quarterly Economic Overview is that although the economy's momentum may be softening (as Westpac was predicting well before the change of government), it is doing so from a higher starting point. Despite some challenges, there are still several positives ahead for New Zealand businesses.

Dominick Stephens, Westpac’s Chief Economist, says that Statistics NZ’s revised figures (which show growth rates for 2015 as 3.5 percent and for 2016 as 4.0 percent, rather than the 2.5 to 3 percent previously estimated) are not only more accurate but make more sense. ‘Rather than lacklustre growth in 2015 and 2016, GDP growth actually ripped away in those years before slowing in 2017. This revised picture fits better with house price dynamics, and makes our per-capita GDP and productivity growth figures look less alarming. But it also makes today’s lack of inflation all the more striking.

‘”Lowflation” has been a global phenomenon, but there are signs that inflation pressures are finally starting to emerge in the United States. This will cause US interest rates to rise. New Zealand is a different story and we expect inflation here to remain quiescent. Consequently, we see no scope for OCR hikes this year. In fact, we find it easier to imagine scenarios leading to an OCR cut.’

The Overview suggests that future GDP growth is likely to be a little slower than in recent years, averaging a little under 3 percent per annum, with growth slower in 2018 before picking up in 2019. Increases in government spending will boost economic activity from mid-2018 and will be reinforced by the related lift in household incomes and spending. However, regulatory changes in the housing and labour markets are likely to offset some of the boost in the near term because of their effect on business confidence.

Although there has been renewed strength in house prices and sales in the past few months, the review expects nationwide house prices to fall by a total of 2 percent over the coming four years. This may have an effect upon Government policies intended to dampen growth, as well as household spending.

The latter could also be affected by the slow-down in immigration since mid-2017. Arrivals have flattened off and departures increased as conditions abroad improve. Despite this, various factors mean the unemployment rate is expected to creep upwards, although probably not by enough to improve franchisors’ current concerns about the availability of suitable staff. Annual inflation is expected to remain in the lower half of the 1-3 percent target range in the near future.

The New Zealand dollar is forecast to fall against the US dollar as interest rates rise there and, to a lesser extent against the euro and the yen. However, it looks stable against the Australian dollar and the pound. Growth forecasts for both China and Australia have been downgraded.

As always, the impact of these and other changes predicted in the Overview on franchisors and franchisees will depend to a large extent on the industry in which they operate. For intending business purchasers, there is little to put them off: however, it will pay them to do their homework, research the industry and the individual franchise thoroughly, and consult specialist advisors before making their decision. 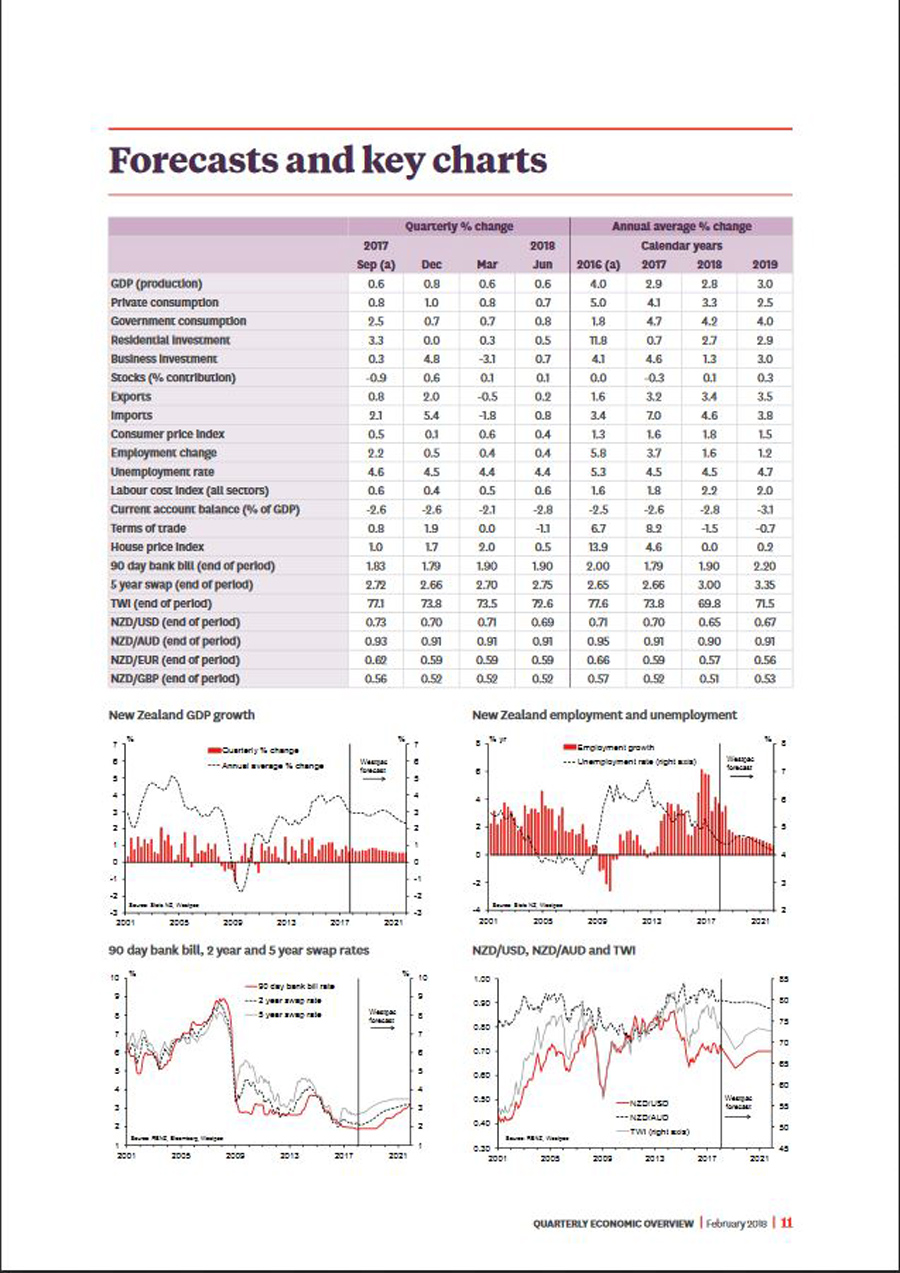 The Forecasts and Key Charts set out the likely road ahead.