Georgie Pie - the brand that refuses to die

Update - 9 May 2013 McDonald's is trialling a Georgie Pie product in 11 stores from next month - read more.

One of the first questions that is always fired at a new managing director of McDonald’s in New Zealand is ‘Are you going to bring back Georgie Pie?’ Patrick Wilson, who took over the reins at McDonald’s last month, is no exception and I suspect he has been asked the question in every single interview since, delivering a diplomatic “We’re investigating our options” response each time. 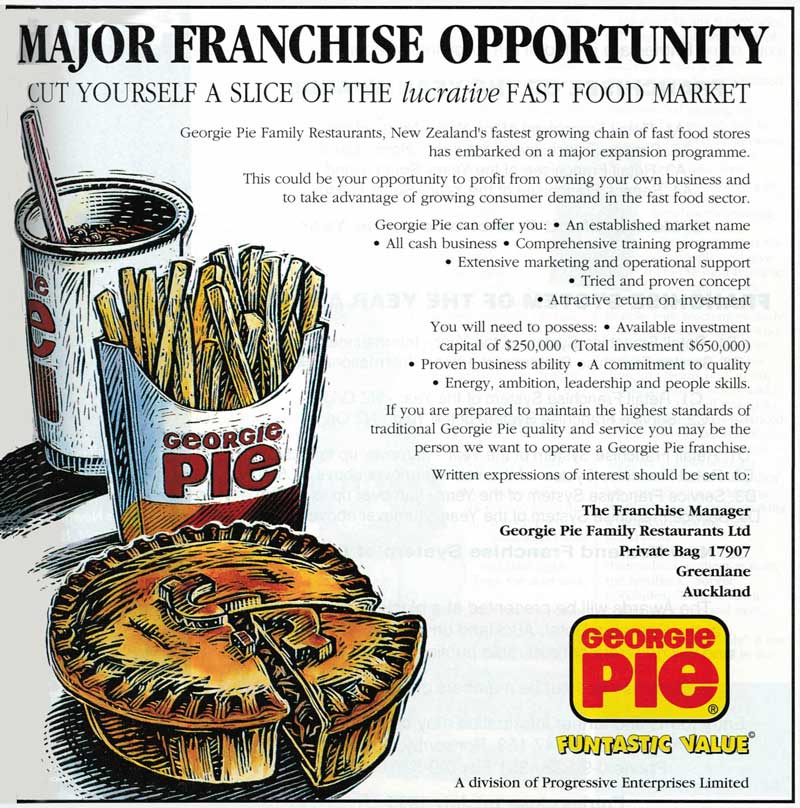 Newcomers to New Zealand must be mystified by the power of the long-dead Georgie Pie brand. Founded in 1977,  Georgie Pie was touted as New Zealand’s home-grown answer to McDonald’s. Under the ownership of supermarket chain Progressive Enterprises, the planned growth of 25 outlets a year was never achieved and the franchise grew to just 30 outlets before being sold to McDonald’s and closed down in 1998. 17 of the outlets were converted into McDonald’s restaurants and the remainder sold off for other purposes, but McDonald’s retained the brand name although it has not used it since. The Georgie Pie restaurants were modelled on US food franchises of the time with children’s playgrounds including ball pools, and also introduced concepts such as drive-throughs, fast food breakfasts and 24-hour opening.

However, it was the product itself that gave Georgie Pie its cult following. New Zealanders have a traditional fondness for pies, and the franchise targetted that with an almost entirely pie-based menu with traditional, exotic and fruit dessert fillings. These were sold via a price-based menu with fixed price points at $1, $2, $3 and $4 – a popular move, but one that left little room for varying costs. This was one of a number of problems with the model which eventually saw the decision made to close it down.

For many New Zealanders Georgie Pie was a part of their youth, and that nostalgia has formed the basis of regular campaigns to bring the brand back in recent years – campaigns that have been given additional force by the emergence of the internet. A ‘Bring back Georgie Pie’ Facebook page has more than 50,000 'likes’, there's a documentary on rebuilding Georgie Pie for a day and you can even bet on the likelihood of the Georgie Pie brand being relaunched on the ipredict website. Interestingly, the website www.bringbackgeorgiepie.co.nz (‘the official website of Georgie Pie’) is registered to Tribal DDB NZ Ltd, McDonald’s advertising agency.

The continuing popularity of Georgie Pie may seem strange, but it presents McDonald’s with something of a headache. As the official custodian of what seems to have become, in that over-worked phrase, an ‘iconic Kiwi brand’ it can’t afford to be seen to dump on it. However, it is hard to see what McDonald’s can reasonably do to capitalise on the apparent demand for Georgie Pie without damaging its own reputation. As Patrick Wilson told Fairfax, ‘It’s a bit “damned if you do, damned if you don’t”’

So what options does McDonald’s realistically have, bearing in mind that Georgie Pie did not have a successful business model even in the less competitive market of 15 years ago? Here are some of the possibilities.

1. Bring back the brand with its own dedicated premises, perhaps on a smaller scale. Property is relatively cheap right now and McDonald’s has the ability to negotiate some excellent deals on good locations, including within food courts where a pie offering might actually provide a point of difference. But the costs of developing and establishing such units make this a high-risk strategy, especially when you consider that such units would inevitably be seen as competing with existing franchisees.

It should also be noted that while some multi-brand ownership is a deliberate strategy for some franchisors (Yum! Brands, which owns KFC, Pizza Hut and Taco Bell being one of the biggest examples), McDonald’s has always flourished through its focus on a single brand. It did take a share in the US arm of British sandwich chain Pret A Manger in 2001, but sold it on within a few years.

2. Establish a separate branded area within existing McDonald’s outlets, like McCafe. This would remove the competition aspect for existing franchisees, and enable the sharing of staff, facilities and some equipment, but would still require considerable investment from franchisees. As an indication, just changing the way the burgers were prepared to ‘Made For You’ recently cost around $100,000 per restaurant, and a whole new product platform would require a lot more. In order to provide an adequate return on investment for franchisees, they would need to be confident that the new products would attract a lot of additional customers and provide a margin at least equal to – or probably greater than – the products that the pies replaced or took sales from.

3. Offer branded Georgie Pie products through the normal McDonald’s counter. That would still involve equipment and training changes though at a lesser level than a dedicated area. Of course, McDonald’s already sells other brand products such as Coke, Sprite and Pump, and has also experimented with branded cereal products, although an other-brand hot food item might be a first. However, there is a limit to the number of additional products that can be offered – in general, adding a new product means removing an old one – and that limits the potential return.

4. Use Georgie Pie as a seasonal promotion – either as a short-term business builder for quiet periods (‘It’s Georgie Pie month at McDonald’s’) or offering a changing limited-choice menu of, say, three fillings per month. This would offer considerable scope for social media interaction with voting on favourites, sharing ideas and even creating runs on certain flavours to make the most of the ‘cult’ aspect while retaining a certain exclusivity for the brand and avoiding the inevitable fatigue once the brand is back.

Because pies could be centrally-baked by suppliers (Progressive invested a huge amount in its own factory, which was another factor in Georgie Pie’s downfall) and require little labour in individual outlets aside from cooking, the production aspects could presumably be managed for this and several of the other options.

5. Introduce Georgie Pie outlets in service stations to offset the inroads being made in this market by Subway. It is probably impractical to create a McDonald’s outlet small enough to fit into such a location, but a pie servery might be workable – and a classic Kiwi brand might sit well in Z, for example.

A Step Forward Or A Step Back?

I’m sure McDonald’s will have considered all these and many more possibilities, but even if any of these options were financially viable, it would still leave two big questions unanswered.

The first of these is the product itself. Although customers have fond memories of the taste of Georgie Pie favourites, tastes have changed. As former McDonald’s head Mark Hawthorne told Franchise New Zealand a few years ago, ‘We could certainly replicate the original pies but people’s tastes have moved on - the pies would probably taste a bit cardboard now.’ That might not have mattered to the many posters on the fan websites who recalled that the original Georgie Pie was a great feed when they were drunk, stoned or hung-over, but it certainly would if the brand were to be re-launched now. The brand carries an expectation that needs to be lived up to, and modern consumers have an expectation of quality, too.

Secondly, there is the whole image of pies themselves. There has been a great deal of focus on healthy eating in recent years and many companies, including – even especially – McDonald’s have made huge changes to their menus and ingredients to reflect this. Introducing pies could set the company’s image back several years, as pies are not seen as a healthy product. One pie manufacturer told me recently that a healthy eating organisation had withdrawn its endorsement for their product, despite it meeting all the criteria, because it did not want to be associated with pies – even healthy ones.

McDonald’s is always the target of obesity campaigners, not necessarily because its products are worse than those of any other food outlet but because it is just so visible: campaigning against McDonald’s makes a far bigger splash (and is easier) than campaigning against 150 independent fish & chip and burger bars that are far less concerned about the content of their food. Bringing back a product with a poor health profile could be a retrograde step. Yes, KFC have enjoyed success with the Double Down burger but KFC is not a family brand in the way McDonald’s is.

Given the negatives, is McDonald’s best option to play along with the Facebook crowd until the interest in Georgie Pie ultimately fades away? I suspect the answer has always been ‘yes,’ and it probably still is, but consider one more thing. The burger market in New Zealand has been dominated by McDonald’s for many years, with Burger King and Wendy’s providing only enough competition to give the appearance of choice. Now, however, Restaurant Brands has got its hands on Carl’s Jr., which has already made quite an impact here. As licensees of KFC, Starbucks and Pizza Hut, Restaurant Brands has the money, the muscle and the expertise (if not the passion) to create a real threat in some of McDonald’s key market segments. Could Georgie Pie be part of McDonald’s response, or would it be a distraction at a critical time? It’s not just the Facebook fans who will be watching Mr Wilson’s future pronouncements with interest.