The latest release of MBIE’s experimental Modelled Territorial Authority Gross Domestic Product (MTAGDP) estimates shows growth in 64 out of 66 territorial authorities in the year to March 2017. The MTAGDP series aligns with Stats NZ’s Regional GDP series for 15 regional council areas. It also provides a breakdown of territorial authority GDP by industry sectors for the years 2000 to 2016.

MBIE has provided a summary of key results with the latest release, highlighting exceptional areas of growth, such as Queenstown-Lakes which has experienced +68.5 percent GDP growth over the five years from 2012 to 2017.

The statistics reinforce the appeal of the regions for franchise buyers, who are increasingly finding that some of the best business opportunities lie outside the main cities where lower overheads can mean higher profitability. Read more

Another measure, GDP per capita (nominal), controls for population growth and allows for a better comparison of GDP values between regions.

Click on the tables on the right to enlarge and see more detail.

The MBIE says that its MTAGDP estimates provide robust, readily available regional economic data at the territorial authority level, supporting research and policy development by more finely distinguishing between the different regions of New Zealand. The series has been released annually by MBIE since 2015. 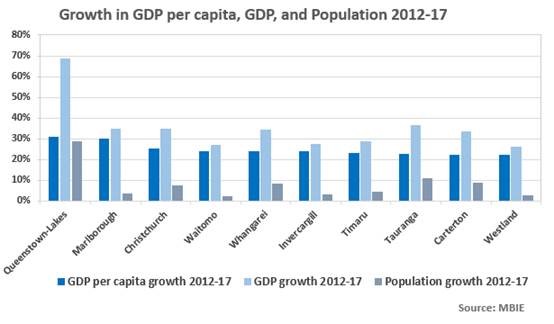