Maturing economy – positives among the questions

Two years ago the economy was really in its prime. Economic growth was 4%, driven by rising house prices, burgeoning construction, population growth, and strong terms of trade. ‘But the drivers of demand are now mixed,’ says Westpac Chief Economist Dominick Stephens in the bank’s latest Quarterly Economic Overview.

‘The housing market has cooled and consumer spending has slowed in response. The construction sector is also taking a breather, and population growth is slowing. But there are positives too – the terms of trade are strong and government spending is stimulatory. This mixture suggests the cycle will age gracefully rather than expire suddenly, with middling rates of GDP growth.’

In fact, Westpac’s latest forecasts of GDP growth over the next few years are slightly higher compared to the previous Economic Overview in February, given the prospect of an extended period of growth in government spending. In addition, the high level of the terms of trade and strong growth in tourism are set to provide an ongoing boost to national income.

‘However,’ the Overview points out, ‘Net migration is coming off its highs, reducing one of the sources of easy growth for businesses in recent years. The housing market is likely to be weighed down by a range of government policies in the coming years. The Canterbury earthquake rebuild is winding down. And the construction sector in the rest of the country faces constraints from access to finance and skill shortages.’

The official statistics suggest while GDP grew by 4% in 2016 (the fastest pace in more than a decade), growth in 2017 was slower at 2.9%  – still a positive figure and possibly a slightly pessimistic one, as statistics for previous years were all revised upwards recently (see Rewriting History).

‘To some degree, this slowdown is likely to be transitory,’ suggests the Overview. ‘Business confidence has remained low since the election, which in part reflects nervousness about the impact of the new Government. We are expecting a hiatus in business hiring and investment over this year, with growth resuming in the following years.’ Unemployment rates are expected to rise slightly by the end of the year, improving again in the following years. ‘As a result, we expect only a gradual lift in real wage growth, even with the impact of policies such as minimum wage hikes and increased collective bargaining.’

New Zealand’s international trade performance remains a bright spot.’ The terms of trade reached an all-time high last year, with price gains spread widely across our commodity exports. While we may see some headwinds for export prices this year, we expect them to remain at relatively high levels over the coming years. Tourism has also been a useful source of growth, with visitor numbers reaching new highs. A lower New Zealand dollar will help to boost export returns and make New Zealand a relatively more attractive tourist destination.’

‘Strong export earnings are providing the income required for New Zealand to grow without ramping up debt further. This squares our expectation of reasonable economic growth with our observation that the household savings rate will rise.'

Globally, economic activity is picking up steam, with growth at 3.8 percent – the fastest pace since 2011. However, this is expected to be uneven. The rise in protectionist sentiment creates an uncertain environment, although Westpac’s economists note that threatened trade restrictions have not yet been put into effect and say ‘it’s looking increasingly likely that a diplomatic solution will be found.’ The US is expected to continue growing at ‘a healthy clip’, while Chinese GDP growth will slow from 7 percent to 6 percent, affecting many other countries. The report suggests Australian GDP growth will remain below trend for the next few years.

From a franchising point of view, Franchise New Zealand observes that recent upheavals in the Australian franchise sector and the latest government review has resulted in an increasing number of Australian companies looking for growth opportunities in the New Zealand market, either through direct or licensed operations here, or through mergers and acquisitions.

Although New Zealand is highly franchise-literate, there is already a shortage of suitable franchisees in many sectors and this may inhibit growth. Other factors include our different competitor brands, regulatory regimes and the access to labour, all of which can affect the viability of imported business models and mean that, as always, franchise buyers need to be careful to carry out proper due diligence on any opportunity using local advisors. 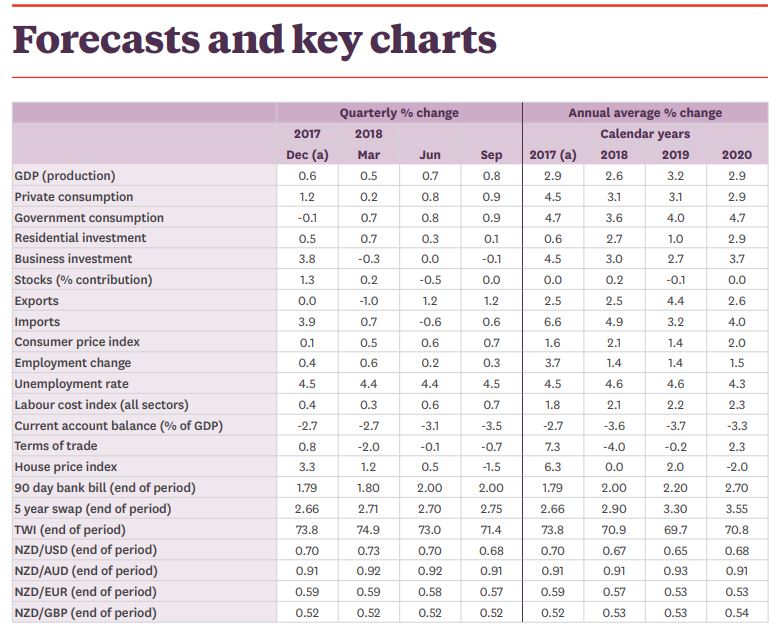 Forecasts from the latest Westpac Overview - May 2018