31 October 2017 - Prime Minister Jacinda Ardern is looking at offering tax breaks for small businesses to ease the burden of incremental increases to the minimum wage rate over the next three years.

As part of the coalition agreement betwen the Labour Party and NZ First, the Government intends the minimum wage to increase to $20 per hour by 2020 from its current level of $15.75. Under National, the rate increased by 50c per year from 2013 to 2017.

Small businesses have already expressed concern about the impact this will have on their ability to compete, given the fact that wages are one of their biggest costs. In the hospitality industry, it has been suggested that the result could be that a cup of coffee will cost $6 or more. Read more about franchisor's concerns here.

While defending the increase and pointing out that a minimum wage increase would help stimulate the economy, Jacinda Ardern said the Government would look at Australia's model, which features a stepped tax bracket with a lower tax rate for businesses with a turnover below $10 million. Listen to her interview with 1 News here.

While there is no official definition of 'small business' in New Zealand, according to the Ministry of Business, Innovation & Employment (MBIE), 97 percent of enterprises in New Zealand have fewer than 20 employees. Of the 487,602 enterprises that MBIE recorded in May 2016: 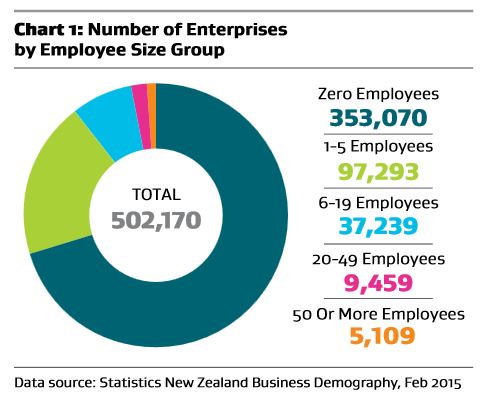 The majority of franchisees (and many franchisors) would fall into the under-20 employees bracket, although those with a sizeable pool of part-time workers (eg. hospitality franchises) would exceed this. 96 percent of enterprises with fewer than 20 employees are independent operations not owned by others. Over 70 percent of all employees are employed by companies in the 20-plus bracket.

Download a pdf of statistics on small business in New Zealand from the MBIE.

Ms Ardern told TVNZ’s 1 News  that the government would consider easing the burden of wage increases on small businesses, potentially through tax changes.

‘I accept that small businesses in particular are going to be concerned about this,’ she said.

In Australia, businesses with turnover of less than $10 million pay a 27.5 per cent company tax rate, compared to 30 per cent paid by larger companies for the 2016-17 financial year.