'About a third of all migrant arrivals for the year were people coming to New Zealand on work visas,' population statistics senior manager Peter Dolan said. 'Just over a quarter of all work-visa migrants were from the United Kingdom and France. The next largest sources of migrants coming to New Zealand to work were from Germany, Australia, South Africa, and the United States.'

Visa types contributing most to the migrant arrivals were:

With many franchisors reporting that finding access to suitable staff is still one of their top three concerns about factors inhibiting growth, the increase in those arriving on working visas could be good news in some sectors. Similarly, the increase in those holding residence visas might assist with the number one challenge - the availability of suitable franchisees.

As a 2011 survey showed, language and communication skills can have a major impact on franchisee performance. With many of the new arrivals coming from English-speaking countries, there is potential for more people to look at franchise opportunities which offer them the potential to establish a business with a model proven in their new country. Read our November 2016 article "Immigration to NZ, Brexit and the Trump Factor" for more about the influence of the changing face of immigration on franchising in New Zealand.

Visitor arrivals at a record-equalling level in February 2017 year

International migration statistics rely on the information provided on passenger cards at the time of travel. The reported length of intended stay in New Zealand, or time away from New Zealand, determines whether the passenger is a visitor or a migrant.

Seasonal fluctuations in short-term traveller numbers describes how the number of overseas visitors in New Zealand, and New Zealand residents travelling overseas, varies across each day of the year. 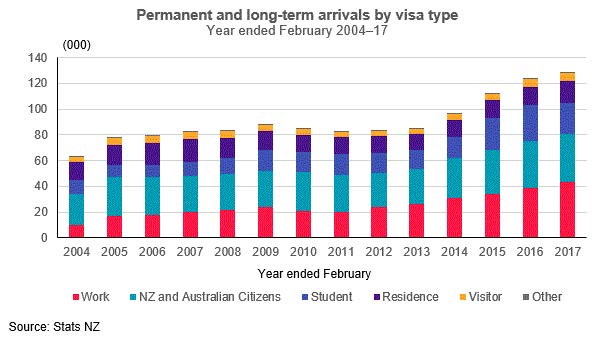