New figures released by Statistics New Zealand today reinforce the points made by Natalie Jackson, a professor of demography, in a fascinating speech at the national franchise conference last week.

Professor Jackson, who is Director of the National Institute of Demographic and Economic Analysis, stimulated the audience with facts such as: 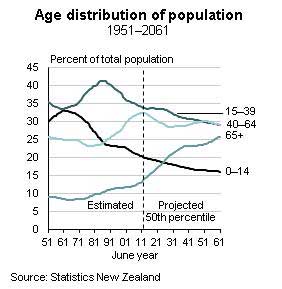 Today’s statistics put some specific numbers on the trends. New Zealand's population aged 65-plus is projected to eclipse 1 million in the late 2020s, when the number of elderly (65-plus) will exceed the number of children (under 15). Currently, there are 600,000 people aged 65-plus and 900,000 under 15.

Currently 4.4 million people live in New Zealand, with total population projected to reach 5 million in the mid-2020s and 6 million in 2061. According to Statistics NZ, ‘Population growth will slow as our population ages and the gap between the number of births and deaths narrows. A population of seven million or more by 2061 is unlikely, barring major changes in fertility rates or net migration.’

According to Professor Jackson, the good thing about population changes is that they are very predictable – for example, we can tell from the birth rate today how many school leavers there will be in 16-18 years’ time. Franchises can therefore plan ahead, knowing there will be fewer younger people and almost all future growth will come from older age groups.’ We aren’t able to change our ageing demography, but we can respond to it in advance.’

And she gave one surprising example. ‘From the birth rate, you can predict that the market for ice cream in China has already peaked. That means that ice cream manufacturers and retailers going into China need to develop new flavours that will suit a maturing customer base.’ Franchisors and franchisees need to apply a similar approach to their own markets in New Zealand.