April 2010 - McDonald’s may be a global giant, but the brand’s success is based upon its ability to attract local talent and adapt to local conditions wherever it goes. A new book by Rosemary Hepozden tells the story of how McDonald’s came to New Zealand and documents its first 35 years here.

Golden Arches Under Southern Skies is an authorised biography of the brand, with a percentage of profits going to Ronald McDonald House, but it’s not a boring PR project. Rather, as McDonald’s franchisee and book instigator Mark Jenkins notes, ‘It’s an affectionate, frank and sometimes surprising account.’

The book chronicles the efforts of brothers Wally and Hugh Morris to bring McDonald’s to New Zealand in the 1970s, despite the opposition of the legendary Ray Kroc, who had been unimpressed on a visit: ‘We are not going there…There aren’t any people. I cruised into New Zealand on a Saturday and there was no one in the street anywhere, and on Sunday it was even worse. I never met a more dead-than-alive hole in my life.’

The Morris brothers, both devout members of the Salvation Army whose work ethic and frugality had led them to build the Shoprite supermarket chain of over 100 stores, knew better and eventually persuaded McDonald’s to develop a joint venture with them. But that was only the start of the challenges: import restrictions made it difficult to import essential items from kitchens to uniforms, and ways had to be found around the regulations. Originally, the company was given permission to import the kitchen for its first store in Porirua for just a year to act as a template for local manufacturers to copy, but the wily Wally had the kitchen cemented into the floor, making removal impossible. The resulting problem – and the need to import more kitchens for new stores – led him to devise a complex deal involving McDonald’s America buying surplus stocks of cheese from the New Zealand Dairy Board in Germany! 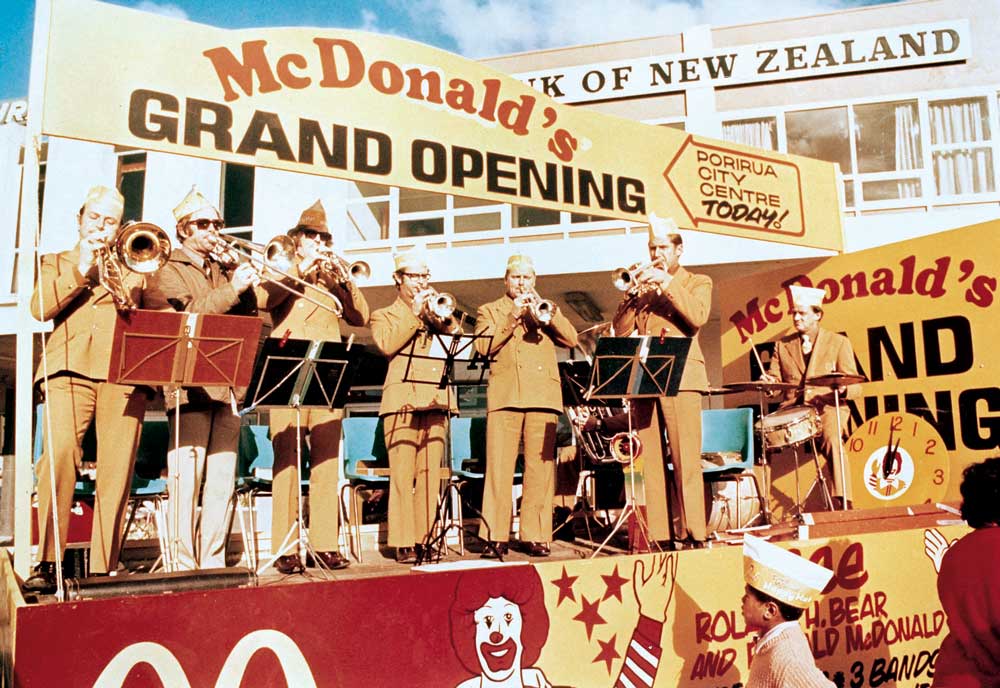 The first store in New Zealand opened quietly on 7 June 1976, but the chaos surrounding the grand opening the following Saturday demonstrated the pulling power of the golden arches. Despite it being so cold there was snow in the hills, and Ronald McDonald almost suffering a nasty accident when his umbrella got caught in the blades of a helicopter, the crowd was so massive that the managers had to lock the restaurant doors and only allow new customers in as old ones left.

The book does a good job of charting the various stages that McDonald’s has gone through over the last 35 years, including the Morris brothers’ loss of control, the problems of trying to impose strict corporate protocols on the more laid-back New Zealand culture and the initial problems involved in meeting stringent product requirements from local suppliers. Of course, there are some self-congratulatory pats on the back, but these often serve to emphasise how seriously McDonald’s takes its role of good corporate citizen. One early example was the conversion of the former ASB headquarters in  Queen Street into the company’s first flagship restaurant in 1976, thereby preserving a part of Auckland’s heritage at a time when the wrecker’s ball was demolishing many of the city’s finest buildings. The company’s work on road safety, healthy eating and, of course, Ronald McDonald House are also detailed.

For those with an interest in franchising, though, it is the anecdotes of both franchisees and franchisors that will make most fascinating reading, from the bloody-minded Bryan Old, the Hamilton franchisee who created the Kiwiburger and several other products, to the ‘tough love’ approach of long-time McDonald’s general manager in NZ, Gary Lloydd. ‘If you don’t like it, you can give me your keys and bugger off,’ Lloydd told one meeting of disgruntled franchisees. But he created intense loyalty and is clearly fondly-remembered and much-missed by all those who worked with and for him.

These days McDonald’s faces tougher competition than ever (it has just been overtaken worldwide for number of outlets by Subway) and is frequently regarded as the whipping boy for any number of issues from obesity to global deforestation and dead-end jobs. Its image was badly damaged in 1990 by the company’s libel action against environmental demonstrators in the UK – ‘The worst PR decision ever in the history of global business,’ says current MD Mark Hawthorne. All these aspects are covered in the book and will make interesting reading for anyone wanting to understand how McDonald’s has developed and grown in response to market changes over the years.

The book is available now  in Paper Plus and other independent booksellers for $29.90