Economy throttling back but growth to continue

15 August 2017 – The latest Westpac Economic Overview finds rising global interest rates are balanced by rising commodity prices for New Zealand products. Growth will continue but slow by the end of the decade.

In the latest Westpac Economic Overview, published today, Dominick Stephens, Westpac’s Chief Economist, comments: ‘The New Zealand economy is now into its seventh year of expansion. While we do expect the growth to roll on, there are a number of areas in which the economy is throttling back.

‘First, the housing market slowdown has intensified. Prices are down 4% in Auckland since the January peak, and prices have flattened elsewhere. And second, residential construction activity has surprised us by levelling off at a time when further rapid growth was anticipated.’

‘The connecting thread between the two is credit – both its price and its availability. The global environment is one of rising interest rates, and that has dragged New Zealand’s fixed mortgage rates higher. Meanwhile, difficulty attracting deposits has made New Zealand banks choosier about who they will lend to. When credit is tight, both property development and property purchases are more difficult. We expect that the housing market will remain subdued, and that will have the usual flow on to consumer spending and the wider economy.’

The report notes that the low interest rates and associated gains in house prices that boosted household spending in recent years also encouraged a large run-up in household debt. Low borrowing rates made it very attractive for investors to purchase residential property using debt, especially given the potential for capital gains. At the same time, increases in house prices meant that owner-occupiers have had to borrow more to purchase housing, while existing owners have spent some of their perceived windfall as house values have risen.

Household debt levels rose by more than 30 percent between 2012 and 2017, which will be a brake of spending growth over the coming years as households have to commit a greater proportion of their future income to debt repayment. While debt servicing costs are currently low, they are set to increase over time.

A further concern is that many borrowers have used debt to increase the purchase of investment properties. Rising borrowing rates will further erode rental yields (which are already at relatively low levels), while also limiting the scope for capital gains.

Interestingly, the 2012-2017 period coincides precisely with the most recent Franchising New Zealand survey, which identified massive growth in the number of franchises, franchised units and franchise sector turnover. The biggest factor affecting further growth is a shortage of potential franchisees but, as the heat comes out of the housing market, it may help encourage people back into investing in their own businesses again.

On the positive side, construction is set to remain a key driver of growth and employment over coming years, with Auckland, Northland, Taranaki, Manawatu and Wellington all performing strongly. However, capacity is becoming stretched and developers are more cautious about building in a softening market, so pick-up may be more gradual in the near term.

Net migration and population growth remain positive although they are expected to ease back. Most positively, tightness in global supply and firm international demand have continued to support prices for some of our key exports, including dairy, beef and lamb. This is boosting incomes and confidence in rural regions, and over time will flow through to increases in downstream spending.

Tourism also continues to be a bright spot for the economy, with a record 3.6 million international visitors over the past year, with increases in spending spread across the country. Growing airline and hotel capacity will support continued growth in the sector over the coming years.

‘But with export success comes a higher exchange rate,’ Dominick notes. ‘That is one of many factors that will tend to keep inflation quiescent over the coming two years. This quarter we have reduced our GDP growth and inflation forecasts, meaning we see even less scope for the RBNZ to hike the OCR. Financial markets are priced for OCR hikes in the second half of 2018, but we view that as quite a distant prospect.’

Of course, the big uncertainty will be the September election, and this quarter’s special topic covers how various election outcomes might affect economic forecasts. 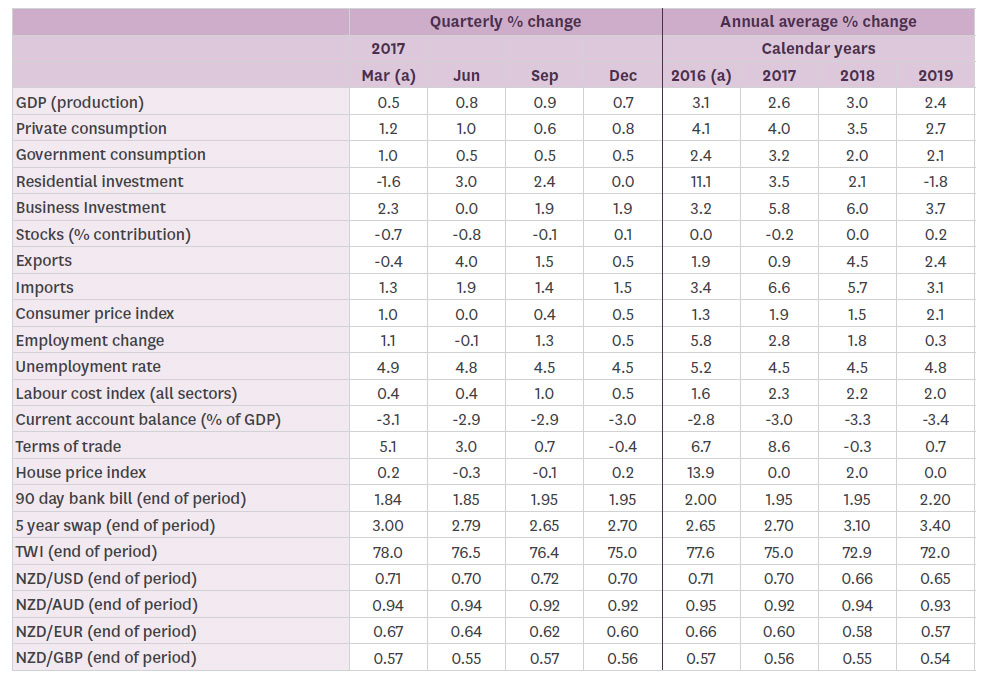