Paramount Commercial Cleaning has been named New Zealand's top franchise for 2008 in a stunning victory for the home-grown system. The Supreme Award for franchisees went to the team at Quest Serviced Apartments, Newmarket.

The winners of the Westpac New Zealand Franchise Awards were announced at a Gala Dinner on Saturday 8 November after a rigorous judging process that took several months and involved applications, interviews and site visits by a team of judges. The Awards are recognised as the peak of achievement in franchising and this year attracted an increased number of entries.

Westpac Franchise System of the Year

This was a timely win for Paramount, which celebrated appointing its 100th franchisee earlier this year. The family company was founded in Auckland in 1979 by Galvin Bartlett and his wife Suzanne, and began franchising in 1996.The company services over 1000 companies nationwide with many franchisees employing teams of cleaners to provide a first-class service.

Of particular interest is the company's Critical Care programme which matches new franchisees with an experienced cleaner to help them maximise their earning power as quickly as possible. This ‘buddy system' extends beyond technical support to ensure that all new franchisees operate according to Paramount's high standards.

The quality of this year's entry was emphasised by the fact that, in winning the Supreme Award, Paramount faced tough competition from Fastway Couriers and Laser Franchise Group - themselves both previous two-time winners of the top title. About the Paramount franchise 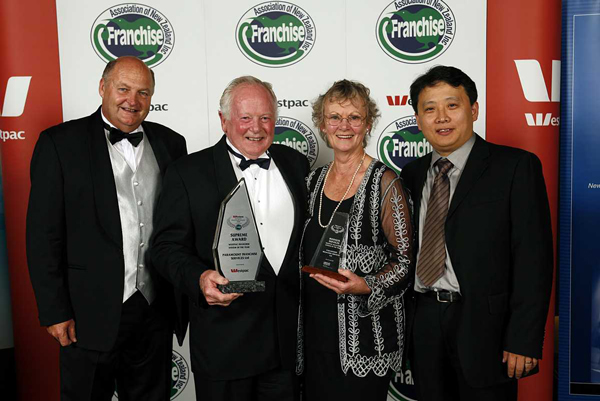 Westpac Franchisee of the Year

Last year, David and his team won the Lifestyle Services category - this year they have taken out to Supreme Award as Franchisee of the Year. The hotel industry is a massive part of franchising, but few do it like Quest. The serviced apartment franchise has revolutionised the accommodation sector over the past decade, using all the classic franchising techniques to reduce costs and increase revenue per room. While the systems are strong, it's the way David Compton has combined them with a focus on anticipating customer needs that made the judges single his business out. ‘Customers are willing to return and pay higher than the market rate to have the special home away from home experience,' noted the judges.

‘There is also a great sense of satisfaction among employees depicted in the fact that there is no need to advertise and staff are willing to bring in their friends to their workplace.' In fact, the first people that David thanked in his acceptance speech was his housekeepers. About the Quest franchise 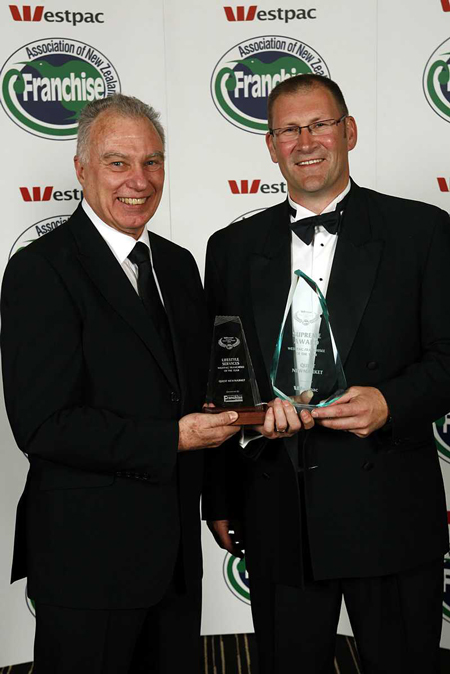 The Supreme Award winners did the double in this category - not only did they win Franchisor of the Year but their Hamilton franchisees also took out the Franchisee of the Year title. About the Paramount franchise

These former farmers have taken to their new life like ducks to water. They bought their Paramount Services franchise in August 2007 when it had a monthly revenue of $11,600. Within 12 months, they had increased that by a massive 63% during a time when many were experiencing the first winds of recession. Today they employ seven staff and enjoy rather more time off than they ever got farming. They say their catchphrase is, ‘Nothing is a problem.' About the Paramount franchise

Xpresso Delight franchisees provide top quality automatic coffee machines into workplaces, with franchisees charging only for the consumables used. The concept has proved hugely popular in Australia, where the franchise was launched in 2004, where there are 94 franchisees. There are currently six franchisees in New Zealand. About the Xpresso franchise

The first Xpresso Delight franchisees in New Zealand, Allan and Kay Parker have achieved immense success since starting in September 2006.  Achieving sales growth of 16.8% in the 07/08 financial year, the couple also act as the franchise's master agents for New Zealand. The couple's source of competitive advantage comes from providing quality coffee, great service and exceptional convenience. Their long-term goal is to continue their yearly revenue growth rate of 10%. About the Xpresso franchise

Exceed Maintenance has brought huge professionalism to the aluminium window and door repair market. The company was founded 16 years ago by David and Karen Dovey and now has 27 franchisees operating nationwide. Exceed has always prided itself on excellent communications and support, and hasn't been afraid to take bold steps to stay ahead of the market - including two total rebrandings. The judges were particularly impressed with the company's step-by-step business planning process. About the Exceed franchise

Last year, Colin and Serena were finalists in this category and beaten only by one of their fellow VIP franchisees. The South African couple had vowed that they would improve their business as a result of what they learned from entering in 2007 and so they did. 'This is a small business with committed owners,' commented the judges. 'Their focus on continuous improvement and outstanding service delivery was pivotal to them winning this award.' This marks the third year in a row that VIP franchisees have won this title, making Estelle Logan a very proud woman - the current Franchise Association chairman is the national franchisee for VIP in New Zealand. About the VIP franchise

Franchise System of the Year - Home Instead Senior Care

Home Instead Senior Care provides quality in-home care for elderly and infirm New Zealanders. The franchise was brought to New Zealand from the USA in 2005 by Waikato couple Neil and Wendy Farnworth, who have a background in the hospitality industry. Since franchising in May 2007, they have developed seven franchised offices throughout the country. ‘I really believe in what we do and know that the assistance we provide makes a real difference in the lives of others,' says Neil Farnworth. About the Home Instead franchise

Category winners Quest Newmarket were impossible to beat this year - they went on to win the Westpac Supreme Award for Franchisee of the Year. Judges noted that Quest demonstrates a very strong understanding of their customers and markets, with a clear focus on providing top level service whilst maintaining an ethos of continuous improvement through feedback. About the Quest franchise

Sponsored by The Franchise Coach

Mr Rental could well be the right business for the right time at the moment, with a recent surge in customer volume. This home appliance and white goods rental franchise specialises in the medium and long -term rental of fridges, freezers, washers, dryers, TVs, VCRs, DVDs and microwaves. The company started franchising in Australia in 2001 and has 60 stores there and 19 in New Zealand. About the Mr Rental franchise

Franchisee of the Year - The Stacey Family, Mr Rental Hamilton

Colin & Maggie Stacey and their daughters Nina and Holly were back on stage in 2008 having taken out this same title last year The family-run business opened in Hamilton in 2003 and has enjoyed huge success ever since. They are strong believers in continuous evaluation and used last year's Awards entry process to see how they could learn to provide an even better service to their 700 customers. It clearly worked. About the Mr Rental franchise

Master Franchisee of the Year

Graham and Denise Clarke first joined Fastway Couriers as courier franchisees in 1993 and then capitalised on the opportunity by purchasing the Wanganui regional franchise in 1999. The two principles by which Graham and Denise run their regional franchise is to treat people the way they want to be treated and always to be honest. ‘After all, you can always offer solutions or an alternative,' says Graham.  The couple respect the Fastway system and have used it to maximum advantage in building a highly-successful business in a region that doesn't always attract national attention. With their win this year, all that has changed. About the Fastway franchise

Franchize Consultants are New Zealand's largest and oldest-established franchise consultancy, bringing together a group of specialists to help advise many of the country's top franchise brands and start-ups. Headed by Win Robinson, who has over 30 years' experience in franchising and Dr Callum Floyd, the company also runs a series of training seminars for franchisors and franchisees. About Franchize Consultants

The 2008 event marked the 14th year of the New Zealand Franchise Awards which are organised by the Franchise Association of New Zealand with the aid of the Business Excellence Foundation. The head judge was Dr Gael McDonald, Professor of Business Ethics and Vice President of Research at Unitec.