There are some brand new names and some familiar faces on the winners' list for this year's Westpac New Zealand Franchise Awards, which were announced on Saturday 14th November.

When Bill Sampson was named New Zealand’s Franchisee of the Year for 2009/10 at the annual awards ceremony in November, the whole room seemed to erupt. The Fastway Couriers franchisee from Tauranga had earlier won the Business Services category and his sincere speech of thanks had touched everybody there. When his name was read out again he was embraced by every one of the Fastway whanau at his table before making his way to the stage to collect the trophy from the Hon Simon Power, Minister of Commerce.

The other big winners on the night were Columbus Coffee, which took the title of Westpac Franchise System of the Year at its first attempt. The New Zealand-founded franchise beat stiff international competition from within its own industry as well as top franchises from other sectors.

The Awards were presented on Saturday 14th November in Auckland in the presence of the Hon Simon Power, Minister of Commerce. Entry was open to all members of the Franchise Association of New Zealand.

Westpac Franchisee of the Year 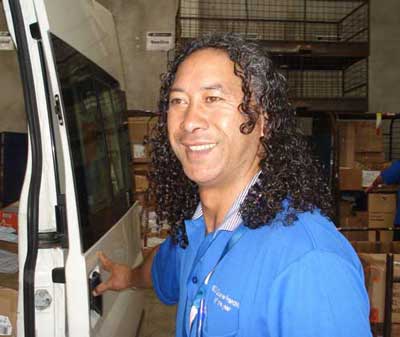 Bill Sampson epitomises the spirit of franchising by taking the opportunity that the Fastway franchise offered him and building on it to create a success story of his own. The result is a business that has huge customer loyalty: when Bill asked his customers for testimonials, he received 61 responses and people were still volunteering to write more after the awards entry date closed.

Bill joined Fastway Couriers four years ago when he bought the Tauranga franchise from his father-in-law. He is described by the company’s regional franchisees Hugh and Fiona Stocker as ‘An absolute credit to his business and to Fastway as a whole. He is passionate about his work, always smiling and he is well respected by the other couriers who consider him something of a mentor.’ Bill’s older daughters, who are 18 and 25, work with him ‘which means they get a head start in business,’ he says. He and his wife Georgina have just had a new baby as well.

The Awards judges called Bill ‘a vibrant personality’ and commented: ‘His drive and motivation are key to building and retaining his customer relationships. His belief in customer service is demonstrated in everything he does within his business. Bill exemplifies the qualities that drive business success.’ Bill himself puts it more simply: 'My customers are my whanau,' he says. ‘And I hope that my success will inspire other people, too.’

Westpac Franchise System of the Year 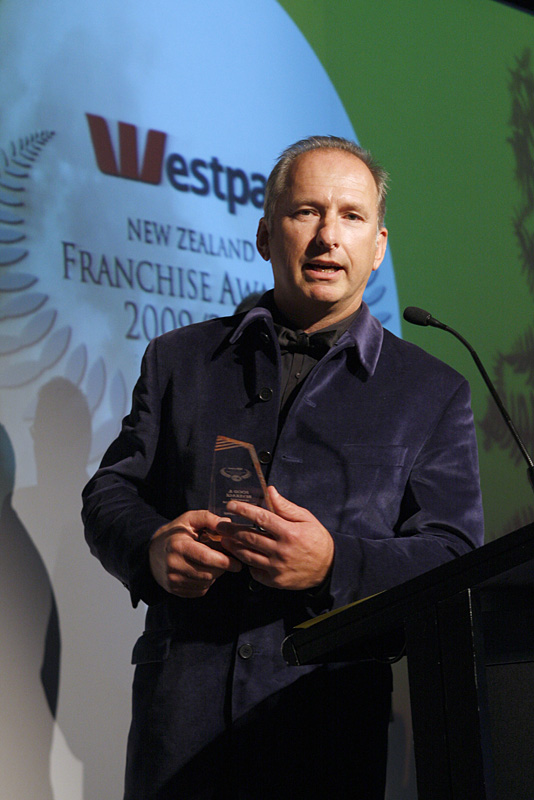 Columbus Coffee started life as a single outlet on Auckland's High Street in 1995. The New Zealand-developed franchise system now has 27 outlets from Auckland to Christchurch which combine café and retail store, selling beans and machines as well as food and, of course, coffee.

The Awards judges named Columbus Coffee as Franchise System of the Year for its ‘highly effective work systems coupled with very strong leadership. A strong focus on performance management supported by a comprehensive suite of measures showed impressive levels of performance across all results areas. KPIs are well-articulated and measured with business results reinforcing that the business growth is in alignment with strategic objectives.’ The judges described Columbus Coffee as ‘a small close-knit community which encourages social interaction and which monitors staff well-being to enhance satisfaction and engagement.’

Paramount Services is a New Zealand-owned commercial cleaning company which won the Franchise System of the Year in 2008. This year, they took out the Business Services category once again, with judges commenting, ‘Paramount has continued on its expansion path to achieve national coverage whilst successfully retaining customers, increasing value added service revenues and sustaining positive levels of turnover and growth.’

Bill went on to take the overall 2009 Franchisee of the Year award.

Columbus Coffee were also named  the overall 2009 Franchise System of the Year.

Graham and Anne-Marie opened The Coffee Club at Sylvia Park in March 2007 and have been busy from day one. They have obviously got on top of the business now, as they found time in 2009 both to enter the Awards and get married! The newlyweds were commended by the judges for ‘a very well-presented application that validated a strong understanding of business fundamentals and a focus on customer-driven excellence as a means of achieving superior business results.’

David and Karen Dovey have grown Exceed from a small window maintenance company in Wellington to a national franchise with the highest standards. The judges were impressed with the passion of the Exceed team and the very strong determination to continue to develop this already successful business. Of particular note was the emphasis on developing a strong organisational culture supported by sound leadership and management practices.

Yann and Susan have a single-minded focus on delivering a professional, personal quality service to their customers. They have used their passion for gardening to develop a mix of client services that is unique within the VIP system in New Zealand. Their single-minded focus, willingness to innovate and ability to build positive relationships with customers are key to their success.

Tina and Tim Morrison have owned their Carpet One franchise in Counties for a little over four years. In that time they have doubled the turnover and become one of the top performers in the 52-strong group. Their franchise is notable for the way it motivates staff to achieve shared goals through reward and recognition, the provision of staff support and the development of a team culture.

Master Franchisee of the Year

Master franchisees sit between franchisor and franchisee, providing support and developing franchisees in a local area. Since taking over the Bay of Plenty master franchise for VIP Home Services two years ago, Sheila & Richard have grown the business by 30% - impressive results in the current climate, as the judges noted. They also commented on the Logan’s ‘effective approach to dealing with their franchisees and the provision of support to them.’ Excellence runs in the family - Richard's brother John is husband of Franchise Association chairman Estelle Logan.

The Franchise Coach provides New Zealand’s corporates and medium-sized enterprises with the support, services and mentoring necessary to create and advance franchise ambitions. The Judges commended David McCulloch and his team for their effective business model which provides valuable support to the franchise sector in New Zealand. ‘In particular, there were very robust approaches to governance and business planning.’

Media Campaign of the Year

Mr Rental’s television advertising has helped to raise brand awareness and sales significantly at a time when households have had to watch their spending. The judges felt that the campaign demonstrated that ‘a good common sense approach supported by research and strong communication within the group enabled success.’

The judges felt that the overall standard of entries this year reflected the increasing professionalism of the franchise sector. Head judge Mike Watson, from the New Zealand Business Excellence Foundation, commented: ‘The judges were impressed by the commitment to customer service and the entrepreneurial spirit and leadership being displayed by all applicants. The evaluation and judging process provides a valuable oversight of the health of the industry and the great things being achieved. In spite of the challenging economic climate franchising is continuing to evolve and grow.’

Franchise New Zealand magazine & website has been involved with the Awards since they were first run in 1996 and this year sponsored the Home Services category.

The Franchise Coach not only helped to sponsor the Awards – they took one home, too. The Judges commended David McCulloch and his team for their effective business model which provides valuable support to the franchise sector in New Zealand.