Complete the form below to receive more detailed information from Crest PropertyCare. We will not share your information with any other third party.

Take Caretaking To The Next Level

With industry-leading training  and great local support, a  Crest PropertyCare franchise  is a rewarding business

Jorge Maturana is just loving being his own boss. The former chef enjoys the freedom of working for himself. ‘No two days are ever the same, and the job gives me such a lot of variety,’ he says happily.

Originally from Chile, Jorge has been in New Zealand for 14 years. He’s always had a hankering to work for himself and through Crest PropertyCare he’s living out his dream.

Family time is important to the 40-year-old and being able to set his own hours is a big bonus, he says. ‘Before I joined Crest PropertyCare I was working 60 hours a week as a chef. It was tiring being on duty evenings and weekends. Now I can choose the hours I do and I just love being outside and the great feedback I get from my customers.’

Jorge enjoys the feeling of a job well done. His cleaning duties can include window cleaning (using the eco-friendly Pure Water system) and exterior washing of commercial buildings. His set tasks may also involve basic garden maintenance, such as grass cutting and cleaning pathways and other handyman jobs, including minor repairs.

‘I like starting early and I wake up with a lot of energy and happy to begin work. The sun is shining and you feel really good,’ he says. ‘It’s really satisfying when you arrive at a customer’s site and you get to work on dirty windows. It doesn’t take long, the result is sparkling clean windows and the customer is extremely happy with the result.’

With plenty of scope to grow his business by taking on more customers, Jorge is excited about the future. ‘I know I have made a good investment and I can see it growing already in terms of the income.’

Being his own boss with a Crest PropertyCare business has also given Aucklander Julian Carnow a new-found freedom.

The 58-year-old spent most of his life in the building and construction industry in South Africa. He had a variety of jobs, working his way up to foreman and then project manager. After moving to New Zealand, he decided to find something that he could turn his hand to and really make his own. ‘I’ve got a few years before retirement and I thought I’d do something for myself,’ he says.

An advert for Crest PropertyCare franchises in Auckland caught his eye: ‘I went to an information night and listened to what was being offered. I took my wife along to a second meeting and decided, “Yep, this is for me.”’

Julian’s customers include a school, a medical centre and large corporate company. It might be an old cliché, but no two days are ever quite the same. He could be carrying out repairs inside or working outdoors cutting back bushes and trimming trees but, whatever’s involved, the work gives him a feeling of ‘a job well done.’

At one school where he works, Julian has been given the additional responsibility of being the acting property manager. ‘I like the autonomy of the role, the decision-making and getting the work done to a high standard. That’s the satisfaction for me.’

Established in 1996, CrestClean has more than 650 franchised businesses involving nearly 2000 personnel serving customers throughout New Zealand. ‘With Crest PropertyCare, franchisees enjoy being their own boss, but they also have the security of knowing they are being supported by a large company,’ says CrestClean Managing Director Grant McLauchlan.

Caretaking contracts are organised and administered by CrestClean. Franchisees are paid twice per month by CrestClean for the contracted services that they have performed. CrestClean also prepares and files GST returns, prepares annual accounts and files a franchisee’s tax return to keep their business compliant.

‘Caretakers may have a trade background or be a person with handyman skills. The franchise would also be ideal for a tradesperson seeking a hands-on business that is  not physically demanding,’  Grant adds.

‘For an investment of as little as $35,000 +gst, plus a suitable vehicle, you can buy a business that will give you a good return – and there’s always the potential to increase your turnover and build the business you want. Contact us and find out more.’ 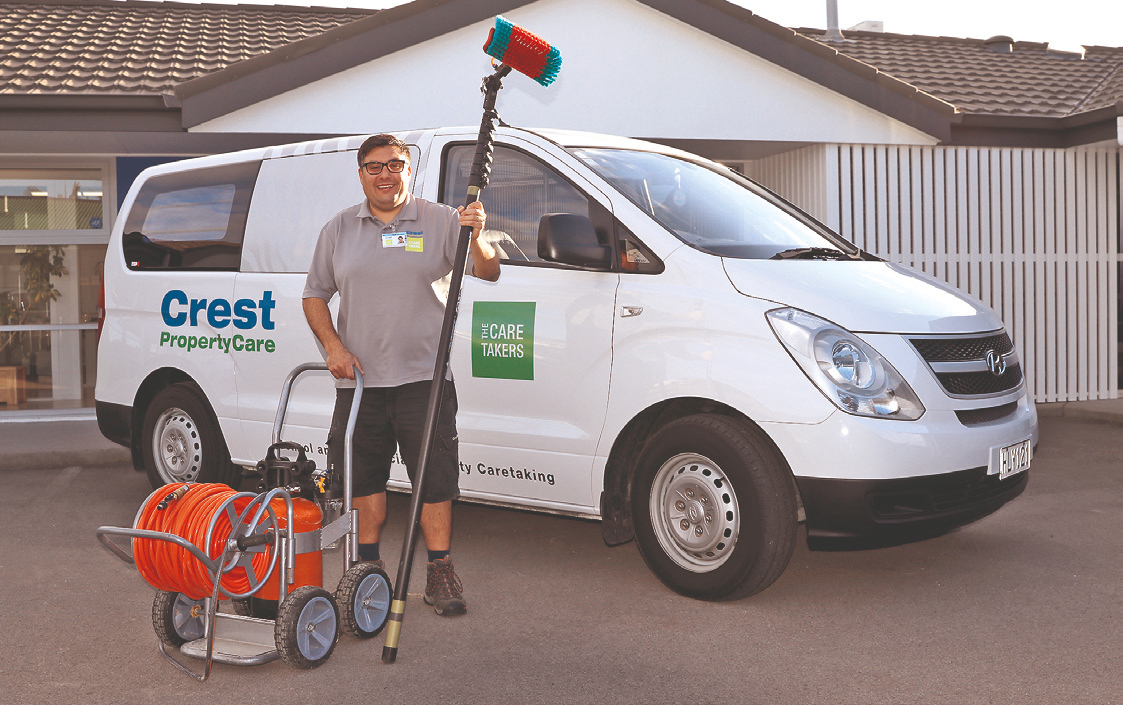 Jorge Maturana 'I know I have made a good investment'