Complete the form below to receive more detailed information from Paramount Services. We will not share your information with any other third party. 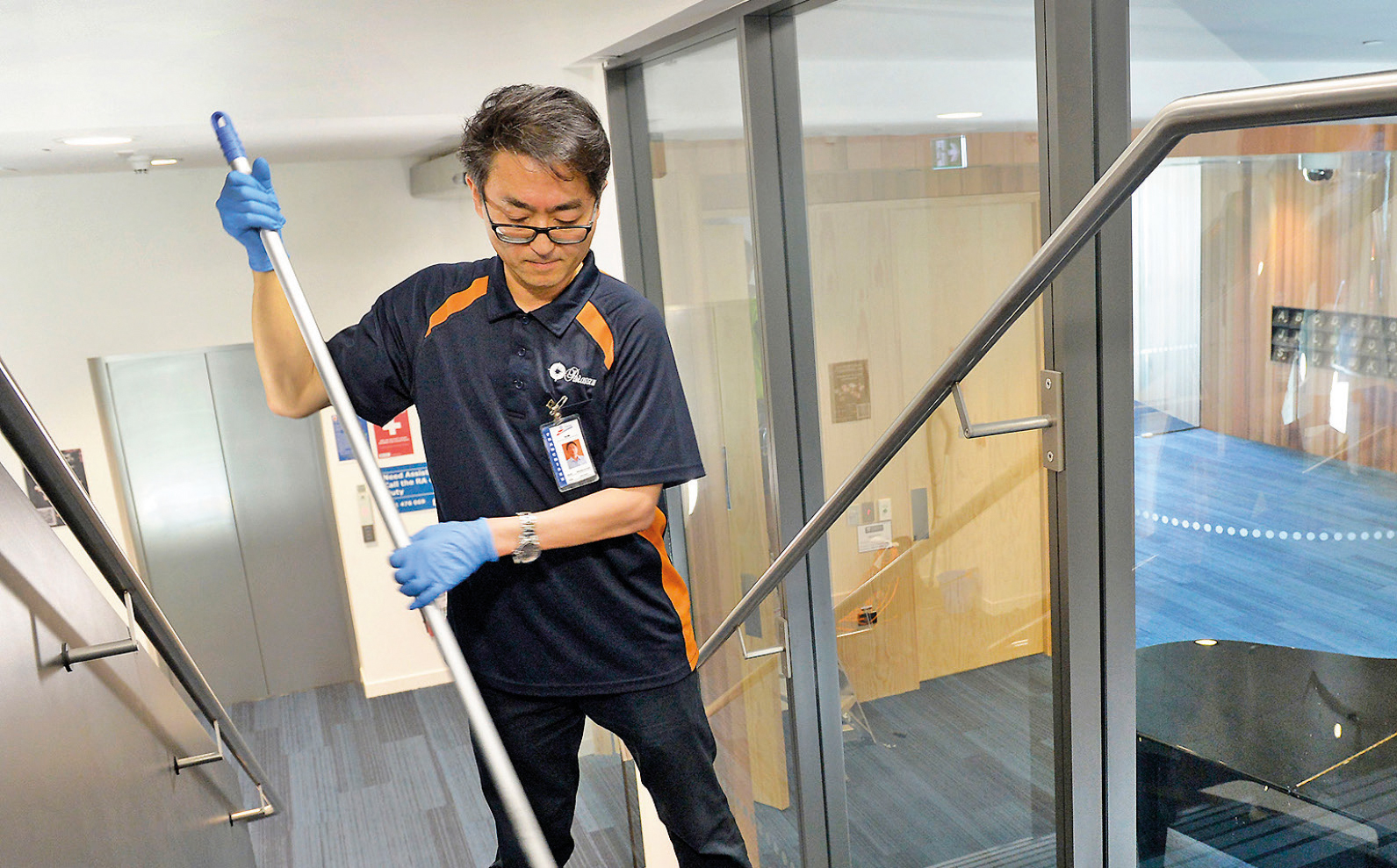 When Beyoung Ho Kim joined Paramount Services as a young man back in 1998, he was looking for an opportunity that would allow him to develop his own business. He’s now been a Paramount franchisee for over twenty years and has eight full time cleaning staff, ‘Many of whom have been with me for more than ten years,’ he says proudly.

Kim is not the only franchisee to have had a successful long-term career within Paramount, says Murray Hamilton, the company’s National Operations Manager. ‘After almost 20 years with Paramount myself, it has become clear to me just how much Paramount offers its franchisees, as well as its customers. There’s a real future for anyone dedicated and committed to their business. Kim is still relatively young, but he would already be in a position to retire if he wanted to.

‘And Paramount is still growing. After taking a few years out to teach in Thailand, I re-joined Paramount in 2007 and the group turnover has since grown over 500 percent. It’s the team effort put in by all our franchisees and the franchisor team that is making it happen.’

Much of Kim’s business comes from his role as principal cleaning operator for much of Auckland University. ‘I started by cleaning some of the smaller accommodation sites in 2005, and because we did such a good job the contracts flowed our way. We now cover twelve sites: four halls of residence and eight student blocks.

‘My staff and I have always tried to be an integral part of all the sites we cater to,’ Kim says. ‘I have a close working relationship with the university’s property management team and help to establish a positive living environment for the residents by maintaining high levels of cleanliness in the common spaces which includes bathrooms, common rooms and dining facilities.’

Attention to detail has been the key. ‘We’ve always gone out of our way to report maintenance issues in our daily cleaning routine. We take the initiative by identifying areas of concern that we notice require attention, and as we are so familiar with the campus after many years we can sometimes offer instant solutions.’

Kim believes that it’s the franchisees who make the difference between ordinary cleaning and the kind of excellence for which Paramount has become a byword. ‘My success depends on my being able to respond quickly to issues or problems as they come up,’ he says. ‘I inspect all the sites I am responsible for almost on a daily basis to ensure my staff’s standards are up to the job’s requirements. I have become the “go-to” person for all the university staff regarding cleaning services, and they all know they can contact me at any time with any issues. I have always expressed enthusiasm for the work my team and Paramount does, and I certainly don’t consider any of my responsibilities to be a burden. With around 3,000 residents combined in all of the halls, it is vital to respond promptly to any matters of urgency – which are not uncommon at such a large site.’

As with any business there are challenges sometimes, and Kim is particularly grateful that he has been with the Paramount franchise from the start. ‘The worst thing is when you lose a customer because they are moving, or closing their business. In my first two years, I lost two of my largest contracts because my customers moved, but Paramount found me substitute contracts very quickly without any conditions. This is one of the great strengths of the franchise and one of the biggest reasons I’ve kept this business for more than twenty years.’

Murray’s own career with Paramount has been dedicated to building relationships between customers and the company during a period of rapid growth, and helping franchisees to service those customers on an ongoing basis. He’s especially proud of Kim and other franchisees like Vikas and Divy Kanojiya, who were named Business to Business Franchisees of the Year, in the 2019 Westpac New Zealand Franchise Awards, and Helen Lei and Stanley Siew who won the Small Business Franchisee of the Year title. One of the Paramount team, Avi Rao, also won a Field Manager of the Year Award.

‘Kim’s success is the result not just of the hard work he has put in to grow his business, but also because he has represented Paramount Services so well,’ says Murray. ‘Kim has built an excellent relationship with all sections of the university he has to deal with and any hiccup he attends to immediately. As a result, we’ve never had a formal complaint since he started managing their cleaning, and when you consider there are something like 2,000 individual services required there each year, that’s a terrific record.

‘Paramount has plenty of opportunities for franchisees in all parts of the country for anyone interested in a long-term future,’ Murray concludes. ‘Opportunities start from around $30,000,  so contact us and let’s  start talking.’ 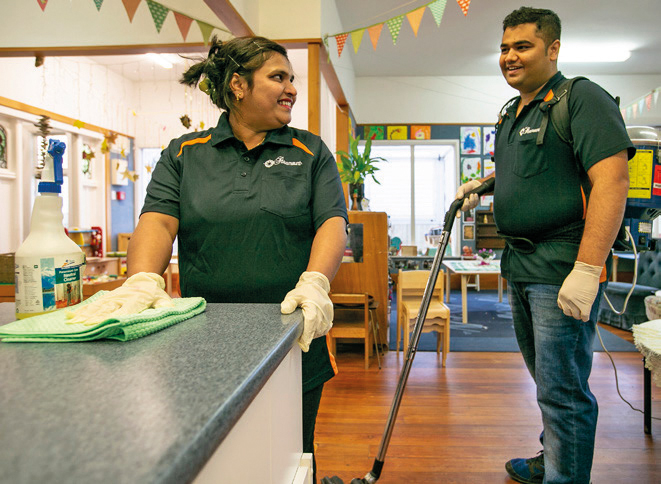 Divy & Vikas Kanojiya Business to Business Franchisees of the Year 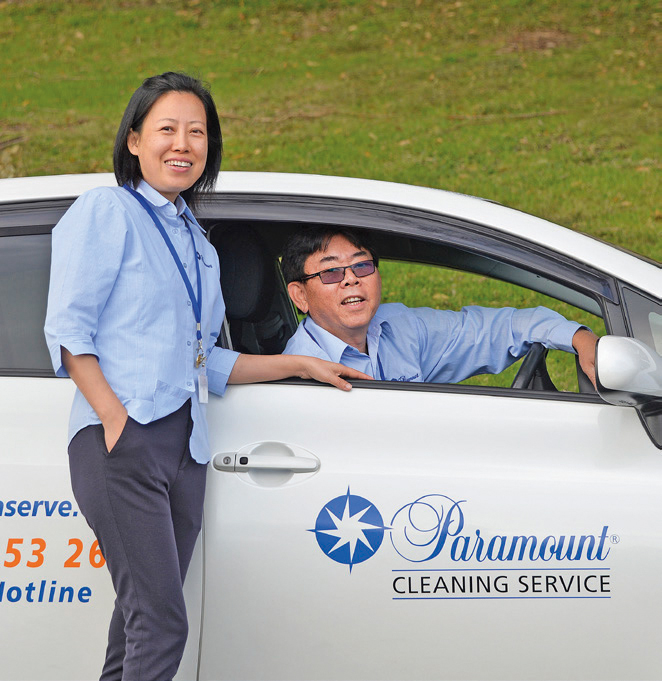