Complete the form below to receive more detailed information from Kitset Assembly Services. We will not share your information with any other third party.

Business From A Box

Buks Pieterse is into his third year with Kitset Assembly Services and couldn’t be happier. ‘Quite honestly, I never expected to be so busy from day one. I was only the fifth franchisee, so it might have seemed a bit of a gamble, but the company had spotted a gap and tapped into a great market. I’m doing really well – I can only speak highly of the franchise, and I’m very glad I took the chance.’

The gap that Kitset Assembly Services spotted was the marriage-straining challenge of flatpack furniture assembly. Managing Director William Flew says, ‘People are actually reluctant to purchase flatpack furniture and other self-assembly items because so many manuals are seemingly written in gibberish. There was a real need for a dependable assembly service, but big retailers were reluctant to take it on as it was outside their model. Kitset Assembly Services has built relationships with the retailers to provide a seamless service to many thousands of satisfied customers. This has allowed franchisees like Buks to build strong businesses. Everybody wins!

‘We now have 21 franchisees in New Zealand, with another couple joining shortly, bringing the global number close to 100 since our expansion over the Tasman and into the UK. We install everything from indoor and outdoor furniture to barbecues, office furniture, fitness equipment, flatpack kitchens and garden sheds. Our franchisees, in their distinctive green vans, can generally assemble any flatpack item within three to four days of purchase, on-site and hassle-free,’ William says.

Buks had spent 24 years working in the earth-moving business in South Africa and New Zealand before deciding he really wanted a change. ‘I found Kitset Assembly Services and thought it was something I could turn my hand to, because I have a practical side. In those days there were only four other franchisees so I talked to all of them, had a close look at the figures and thought I’d give it a go. I was really interested in the concept and actually it surprised me that no-one had thought of it previously. Kitset Assembly Services have provided the professionalism, the systems and the service that make it work for everyone – and it’s been well worth it!’

Buks started his Kitset Assembly Services franchise in South Auckland in January 2017. ‘Coming from a good monthly pay cheque into the unknown was scary at first, but sometimes you’ve just got to go for it. Today, training is very comprehensive – you get a full four weeks – but I must admit it’s hard to remember now, because I got so busy immediately when I started,’ he laughs. ‘Nowadays I’m all over my South Auckland patch doing everything from barbecues to high-end kitchens, garden sheds (I seem to be a bit of a specialist in those!) to trampolines.

‘What I really like is that as well as the great support from the franchise, we’ve also built up quite a community among franchisees. If I’ve had a problem with something, I’ve always found someone who has solved it, because every one of us has different experience.’

So, what do you need to run a business like Kitset Assembly Services? ‘Customer communication is probably top of the list,’ says Buks. ‘You also need a bit of tool sense, a bit of business sense and a go-get attitude. You’ll work with people from all walks of life, so every day will be interesting – no doubt about that.

‘Given my previous job, I like to have my weekends, so as a rule I work five days but I’m happy to be flexible. I doubt if I’d ever have gone into business for myself without the franchise behind me: let’s face it, they’ve done the leg work, they’ve removed most of the anxiety about getting work, and there is great support when you need it. I’m living and enjoying every day, and I have a home life!’

No better time to join

‘With a growing population, new houses going up every week, and most furniture and other vital equipment being delivered in self-assembly format, there is no better time to buy a Kitset Assembly Services franchise,’ says William. ‘If you’d like to join a growing industry, and are as handy with people as with tools, the investment is from around $47,000 +gst.

‘You’re home-based with low operating costs, and you have an exclusive marketing territory with fixed franchise fees. That enables you to confidently grow your business in any direction you choose to take it. As Buks and our other franchisees have found, there are great rewards and terrific variety available.

‘Give me a call – there could be a green van with your name on it just waiting for you.’ 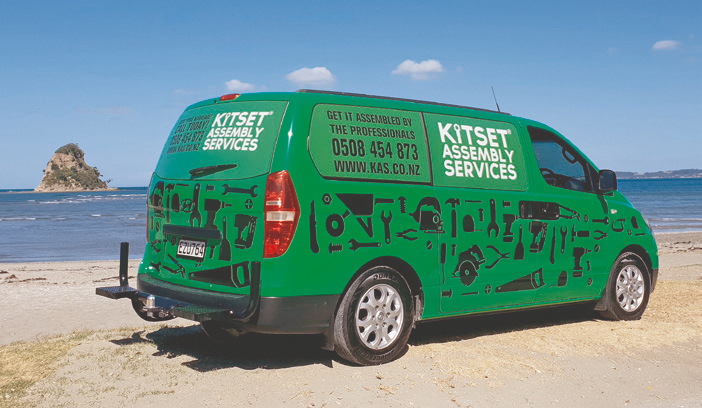