Kiwi Beverages franchisees are off to a flying start

I’ve got a great deal of faith in this concept,’ says Dion Leslie. ‘There’s no shortage of potential outlets for our great range of soft drinks and I want to reach them all before summer so I’ve now got two salesmen working for me.’

Dion is one of the first franchisees with Kiwi Beverages. ‘The non-alcoholic drinks industry in New Zealand is valued at $1.2 billion and is growing by the year,’ says Dion. ‘But people are tired of the same old choices, so Kiwi Beverages has developed an exclusive range of locally-produced fruit juices, energy drinks, sports drinks and waters which we’re putting into shops, convenience stores and hospitality outlets around the country.’

Prior to buying his franchise, Dion’s job in the gaming industry required a great deal of travel. ‘I was tired of getting on a plane every other day. I found Kiwi Beverages in Franchise New Zealand magazine and, after talking to David Thexton, I decided it was the business I wanted.’

David Thexton is the highly-experienced founder of Kiwi Beverages. ‘I guess you could say I know drink and I know franchising,’ smiles David. ‘I created Rio Beverages, which had $100 million in sales before I sold it to Coca-Cola in 2002, and then founded an international business consultancy with 150 franchisees.

‘I’m confident we can take at least 10 percent of a market that’s already worth over $1 billion. We’re putting 10,000 sign-written fridges into outlets, and offering a great opportunity for sales-driven franchisees who can find locations and service them.’

Dion was so impressed with David’s vision and expertise that he purchased two territories in Wellington and the Wairarapa. ‘To give you an idea how big this is, I took a stand at the Wellington Food Fair and picked up a host of leads from over 5000 tastings. This is a sales and relationship management role, so you have to put in the long hours and make the calls to get momentum into the business, but I’m getting there. The products are great and the franchise provides a clear direction, so I’m very glad to have got in at the start.’

Sarah Holland, who owns the Waikato and Tauranga franchise, is another new franchisee. ‘What attracted me was that while this is a low-investment opportunity it’s a very good entry into building a business of my own,’ she explains. ‘I spent 10 years with Lion Nathan as a sales rep before stopping to have children. Now they’re 10 and 7, I wanted to get back into work, but not for someone else as I needed to be in control of my schedule.

‘I love the fact that we have over 50 product lines – a mix of old favourites and new ideas such as iced coffee, iced tea, flavoured milk and protein drinks. One thing I’ve noticed is that retailers like the fact they are dealing with a business owner, not just another rep who is basically a number chasing sales for a big corporate.

‘And you’re not on your own. David and Mandy Thexton are always ready to listen to us, and they have set up an excellent franchise model. I am already employing people to cover Tauranga and Coromandel, and as time goes on I’ll be taking on more of a management role. But let’s get this summer under our belts first,’ she laughs.

Deane Cosgrove has been in the grocery trade for 30 years. ‘I’ve always been employed in sales roles, and when I saw Kiwi Beverages I thought it looked interesting. I was ready for a change, and after I’d dug around a bit I thought “I can do this!” … so here I am!’

Deane was so keen on the opportunity that when he learned the Christchurch franchise close to home had already gone, he upped sticks and bought the Nelson territory instead. But when North Canterbury became available just a few weeks ago, ‘I jumped at it – the smile on my 13-year-old daughter’s face when I said I was coming home said it all. Another couple bought the territory from me and I’m now five weeks into my new area and loving it.

‘Of course, sales don’t just happen – you need to put in the hours and the hard yakka to get the results, and you need broad shoulders, but the brand is great and the products are right on trend in this day and age. The potential is huge!’

Investment levels for a Kiwi Beverages franchise territory range from $40,000 to $105,000. ‘If you have the determination to build a successful business in your own territory, we can provide you with the training and support to make it happen,’ David promises.

‘As Deane, Sarah and Dion are finding, returns are considerable and a top performer could certainly be making $600-700,000 per annum with a developed area,’ says David. ‘Areas still available include West Coast (South Island), Central & Lower Canterbury, Taranaki and Northland, so give me a call if you’d like to join the party!’ 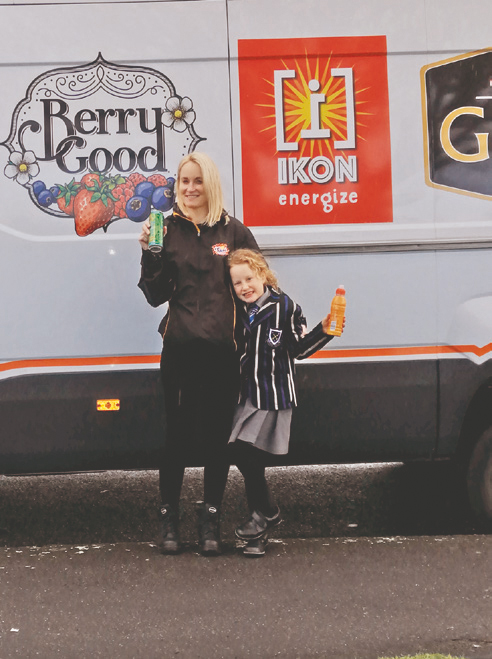 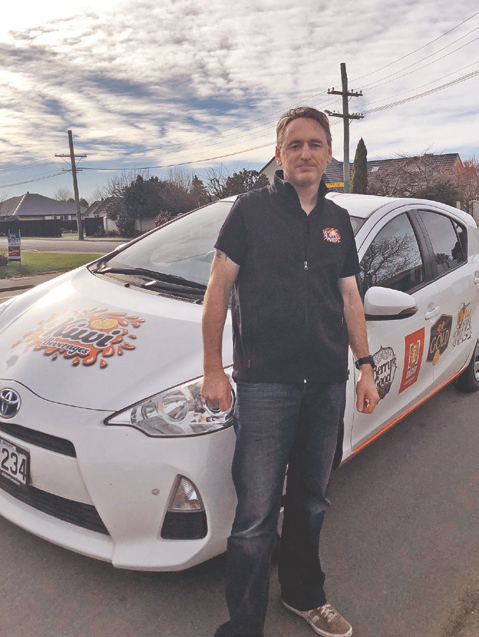