Complete the form below to receive more detailed information from Paramount Services. We will not share your information with any other third party.

After losing a six-year battle to be allowed to keep operating their pig farm in Cambridge, Roger and Elsa Johnson were ready for something new. ‘Being 60, I reckoned my employment prospects were limited so I started looking around at possibilities, including franchises,’ says Roger. It turned out to be the best move they ever made. ‘Ten years later we are sitting pretty, with a commercial cleaning business that’s still growing and a house just two back from the sea. We are very happy with how things have turned out.’

Roger admits, ‘I’d been badly burned by the experiences on the farm and had my confidence well knocked out of me. We’d bought a café in Tirau then sold that, and when I came across Paramount Services I felt the franchise offered a chance to develop a business with minimum capital outlay – that was rather important at the time! Paramount is a national company, and the support they offer franchisees was very attractive.’ It still is – Paramount is the current Westpac Supreme Franchise System of the Year, having won the same title in 2008, 2015 and 2018.

Roger initially bought a small Paramount franchise with existing contracts in Tauranga. ‘It was turning over about $17,000 a month when I first started, but I’ve steadily built it up to around $40,000, and have just added a new cinema complex to my client base, too.’

Roger admits he knew nothing of commercial cleaning before joining the franchise, but says the initial training that Paramount puts all franchisees through gave him the foundation he needed to get started. ‘Today I have 12 staff. I’ve found that getting the right people and training them all to the exacting standards that Paramount sets is one of the keys to the business.’

In many cases, Paramount finds the customers and negotiates the contracts before passing them on to franchisees who manage the cleaning with their staff. Paramount also manages invoicing and debt collection, while guaranteeing payment to franchisees – something which new entrants or first-time business owners find very reassuring.

Before signing up, Roger had the franchise agreement looked over by a lawyer as Paramount required. ‘He outlined the expectations, pointed out the obligations then said that with any good franchise agreement, if you follow the rules then it will just gather dust on the shelf … and that’s what happened,’ he laughs. ‘Paramount has worked with me all the way and if I didn’t have the cashflow at first to take up extra contracts as they came available, well, we found a way. If you can lay out a sensible plan, the franchise team is always very flexible and willing to assist you.’

Over the last 30 years, Paramount has become a leading company in both commercial cleaning and franchising. ‘We’ve evolved over the years, becoming an environmentally-conscious company and taking a stand on issues such as recycling, zero waste and absence of chemicals – something our clients really appreciate,’ says Galvin Bartlett, founder and managing director of Paramount Services. ‘Although we now have over 1,800 clients nationwide, we’ve always been keen to retain a family feel with our 140-plus franchises.

‘Several of our franchisees have been recommended to the business by their friends, and several former employees have been so impressed they’ve also bought into the system and are now running successful businesses. At Paramount we go the extra mile, and many franchisees have commented that, as a company, we genuinely care about them. We want people to succeed and that rubs off on our clients, too. In fact, as our client base continues to grow, we need more franchisees to service them.

‘Paramount has plenty of opportunities in most areas of the country for people such as Roger who want to get into business for themselves with all the benefits and support we can offer to help along the way,’ says Galvin. ‘We expect high standards from ourselves and our franchisees, which is why we are still in business after nearly four decades. So if you feel you have the Paramount potential, call us – opportunities start from around $30,000.’

The last word goes to 10-year franchisee Roger Johnson. ‘Commercial cleaning is a very competitive industry. I’m always being surprised by how many names are out there, and I’m just very glad I chose Paramount rather than any of the others. The fees you pay as a franchisee are money well spent in my view as they give you access to advisors, insurance and legal back-up, and financial horsepower you wouldn’t get on your own!

‘If you are motivated and prepared to take advice coming from people with years of experience, this franchise is a pretty sensible and secure way to get into business,’ Roger concludes. ‘The people at Paramount really look after us.’ 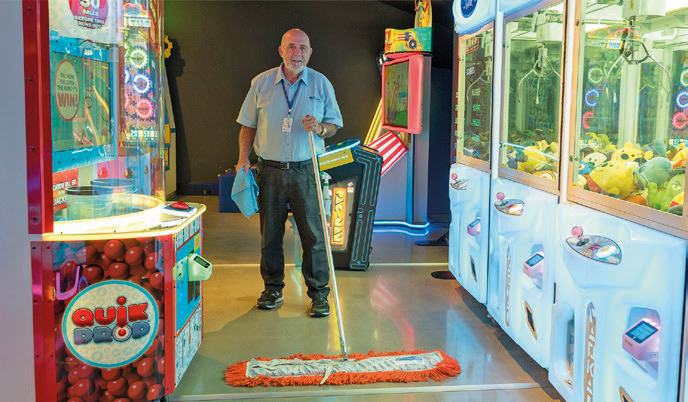