Complete the form below to receive more detailed information from ShowerFix. We will not share your information with any other third party.

You know there’s a market for a repair business when everyone you talk to has a story about a problem they’ve had. For David Howe of ShowerFix, it came as no surprise when our editor started his conversation talking about the difficulty of finding a spare part for a shower door. The consultant David used to develop the ShowerFix franchise package also needed help after a leaky ‘repair’ carried out by a tradie. ‘That’s what we do – fix showers,’ David says. ‘And we are never short of customers!’

David is the third owner of the specialist business which was founded almost 45 years ago. He bought the company six years ago, changed the name to ShowerFix and set about putting in place the systems and support that would enable it to be franchised, with the help of the vastly-experienced team at Franchize Consultants. Today there are two franchisees (plus David himself and a contractor) servicing areas in Auckland, and demand for many more throughout the country.

‘Despite doing no real marketing, all four of us are flat out and we haven’t even scratched the surface,’ says David. ‘We’re working on everything from 1 year-old showers that were poorly-built or poorly-installed to 30 year-old units that need a refurb.

‘Fixing showers might seem like a niche market, but it’s a very big one,’ says David. ‘If a shower is leaking or a shower tray or door is broken, who’s going to fix it? It’s too specialised for a handyman, plumbers and builders don’t have the time or the mix of skills, but we do. We know what can go wrong, know where to get the parts and know how to fix them. We all carry hundreds of parts in the back of the van as well as all the gear we need to solve most problems.’

Wayne Caulton started working for the ShowerFix franchisee in South Auckland last October. By Christmas, he’d decided he liked the business so much that he wanted his own, so he rang David and started his CBD franchise in February.

‘I’d been a gibstopper for 20 years and I wasn’t enjoying the hard physical side of it any more,’ says the Pukekohe man. ‘This suited my skills and was really interesting. Having been self-employed for so long I didn’t know much about franchising, but it’s been great and I soon learned the basics. It’s really satisfying doing a good job for someone and solving their problems. You need some DIY skills and have to like working with tools, but most of all you have to think – and if you can’t work out a solution yourself, you can ring David or one of the others for a second opinion.’

Wayne says that the majority of the work he does is for property managers and real estate agents. ‘Look after them and keep them happy, and the work just keeps coming! But we also get homeowners ringing all the time because they’ve come to a dead end and only ShowerFix can help them.

‘From a business point of view, it’s definitely been a good investment and I’m so glad I’ve done it. Of course, it’s really a joint venture with my wife Christine – she had her own business before and handles all my bookwork and admin. We have a thriving business together and I wouldn’t be able to do it without her.’

David says that the ShowerFix franchise is ideal for a husband-and-wife team like Wayne and Christine, but there’s also plenty of room to grow. ‘Franchisees have their own marketing territory and as soon as they are busy enough they can employ someone and put another van on the road while they spend more time on sales. I’m still doing three days a week on the tools myself, but I’m looking forward to having more franchisees in place to take over that work, too.

For new franchisees, practical skills are a must, and some plumbing and building knowledge an advantage. ‘You have to be able to work out problems and provide solutions, and you have to be prepared to learn new things every week,’ David laughs. ‘We’ll provide full training but there’s always something new!’

New franchise areas are available from around $32,000 +gst, which covers all training, launch promotion, manuals, systems and a good supply of starting stock. ShowerFix franchisees will also need a suitable van. In Auckland, there are also existing areas in the north, east and west which come with an established customer base and fully-equipped vehicles. ‘These could be available from around $80,000 +gst,’ David suggests.

‘Every day is different. Some days you might do $600, some days $1,500. The business is highly profitable and on big jobs, there’s also the opportunity to work with other franchisees, so contact me now to learn more.’

Wayne Caulton has no doubts. ‘I’m really happy with the franchise and I’d recommend it. If you have the right skills, ShowerFix is a great business.’ 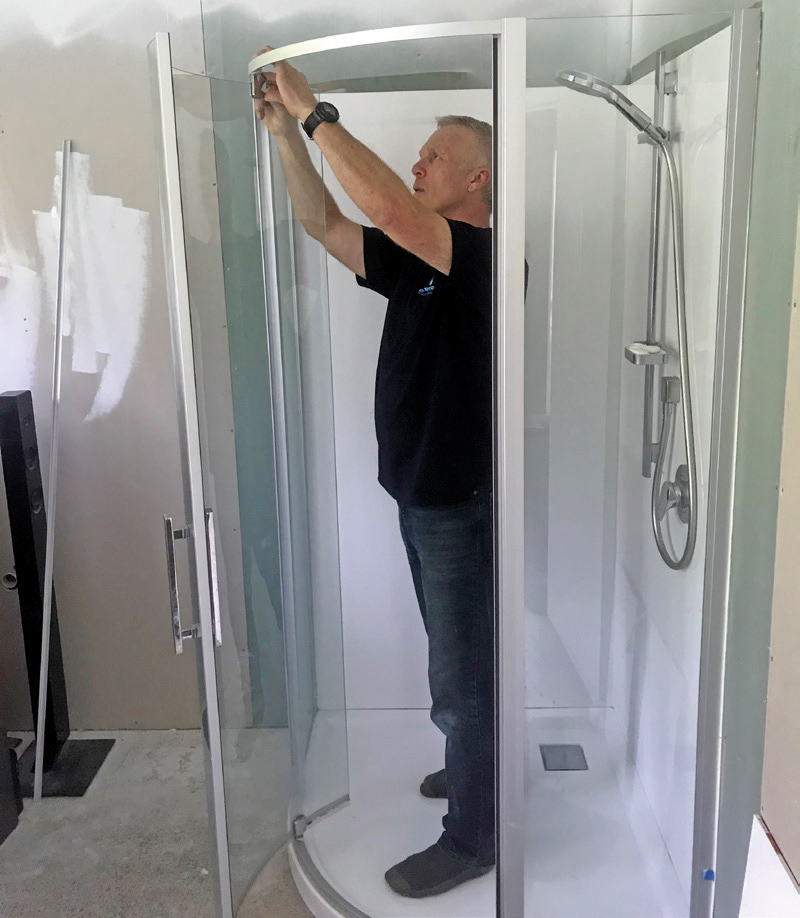 ShowerFix fix showers and are never short of customers