Complete the form below to receive more detailed information from 0800 Sunshade. We will not share your information with any other third party.

With stores throughout New Zealand and more opening all the time, Domino’s is New Zealand’s favourite pizza provider. Putting stores closer to customers so that deliveries can be made faster, hotter and fresher is a key part of the company’s strategy, and with New Zealand’s population about to top 5 million, that means plenty of opportunity for franchisees.

And as Domino’s moves into more areas, so it looks to its franchisees to get involved with their local communities. That was clear at this year’s Domino’s Annual Rally, where over 800 stores across Australasia compete for a range of awards. One of the most coveted is the Big Heart, Big Fun award, which was won by Rishi Sharma, who owns three Domino’s stores in Wellington.

‘Giving back to the community is part of Domino’s philosophy and explains much of our local success,’ says Rishi. ‘We’ve raised funds for families who were coping with a terminally-sick child or children with learning disabilities, and run “dough raisers” for several local schools. We deliver fresh pizzas and drinks to the Hutt Hospital every Saturday night, and we’ve just started working with the Red Cross to give work to refugees. We don’t stop there; we also support our local Youthline – a vital service – by giving $1 for every pizza sold on certain nights to support them.’

Developing leaders as well as customers

Rishi’s first Domino’s was in Birkenhead, Auckland. ‘I worked across the street from an existing store and talked to the owner often. I saw the company was innovative and focused on long-term investment, so when it came up for sale in 2012 I bought it!’

Domino’s believes in developing its people as well as its business, so once Rishi had proved his entrepreneurial skills he was offered an opportunity he couldn’t resist – the chance to move to Wellington in 2015 as a multi-unit franchisee. ‘Within nine months, I’d opened three stores,’ he smiles. ‘Domino’s have a strong belief in “fortressing” – opening multiple stores close to customers to reduce delivery times and deter competitors. It decreases the investment risk for franchisees and makes staffing easier. It’s been highly successful – I now have around 70 staff, and I believe some are future Domino’s leaders themselves.

‘I have a couple of 19-year-olds whose vision it is to be franchisees.  I want them to achieve that goal so by the time they are 25 they will be in their own half million-dollar business. That’s a terrific start for younger people, and one that Domino’s actively supports. Encouraging young entrepreneurs is another way we can give back to the community.’

Talking of young entrepreneurs, Liam and Kaedyn Stops became the youngest-ever Domino’s franchisees when they bought a store in Rotorua aged just 18 and 19 respectively. They both started working at the Hastings store while still at school – Liam was just 12 when he was holding a road-side board advertising special offers. Still in their early twenties, the pair now own three Domino’s stores and are planning more. The Stops brothers won the Leadership Eagle Award at the rally, a title given to the ‘best of the best’ for outstanding leadership and operational success.

‘Liam and Kaedyn show a level of leadership well beyond their years and have developed a number of excited staff members who are primed to be the next generation of managers and franchisees,’ says Cameron Toomey, General Manager of Domino’s New Zealand.

The Stops brothers remain modest about their success. ‘The best recognition we can hope for is our customers coming back because of the quality of their last experience,’ says Liam. ‘In this business, every day is a new beginning. We are passionate about pizza and excellent customer service and that’s been the key to our success. Customers are the centre of our business and we are always seeking innovations or improvements that will enhance our service. Our goal is to own five stores inside five years. We’ve just purchased our third, in Taupo, so we are on track.’

Domino’s is currently seeking new franchisees for key areas all round the country. ‘Some of those new stores will be opened by existing franchisees, some by former staff members, but we’re looking for fresh new faces, too,’ says Cameron. ‘The investment is from $500,000 depending on location, and returns can be considerable for people prepared to put in the effort, work in the store and build a sustainable long-term business.’

Multi-store owner Rishi Sharma says, ‘Attitude is the most important thing you can bring to a Domino’s outlet. You have to be positive, and if you are passionate and like challenges then you can make this business work and have a great deal of fun, too. The company offers the best support; many of the team are former franchisees themselves, so they understand what you need.’

Cameron concludes: ‘When you buy a Domino’s franchise you are buying into a technologically-innovative business focused on financial stability. Call us and let’s make it happen.’ 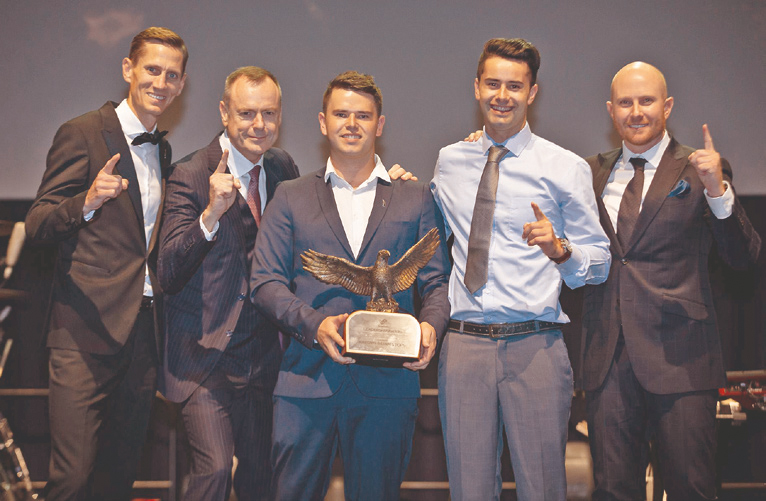