22 January 2015 - Fastway, one of New Zealand’s best-known home-grown franchises, has been sold to a global company based in Dubai but franchise agreements will be unaffected

The $125 million deal, announced yesterday, will see Aramex acquire 100 percent of Fastway Limited’s operations in Australia and New Zealand. The sale has been approved by the Overseas Investment Office.

Fastway was established in Hawkes Bay in 1983 and now has 62 regional depots and 1,500 franchisees across Australia, New Zealand, Ireland, Northern Ireland and South Africa. Aramex (originally Arab American Express) was founded in Jordan just a year earlier as the first courier company in the Middle East. Today, it is a publicly traded company on the Dubai Financial Market, employs more than 13,900 people in 354 locations across 60 countries and leads a strong alliance network bringing together 40 independent express companies from around the world.

Aramex has a track record of expansion through acquisition in many countries, including Mail Call Couriers in Australia in 2014. In addition to courier services, Aramex services include integrated logistics solutions, international and domestic express delivery, freight forwarding, secure records and information management solutions, and e-services, including e-business solutions and ‘shop-and-ship’.

Hussein Hachem, Chief Executive Officer of Aramex, said, ‘We’re excited to add Fastway to Aramex’s global network. The company has a strongly performing business, a well-recognised brand, a leadership position in the Asia-Pacific market, an excellent management team and a large global customer base. Following our recent deals in Thailand and Australia, acquiring Fastway is the next logical strategic move for us. Our customers and franchisees will benefit from increased efficiencies, productivity and reach and the acquisition will provide Fastway’s New Zealand operations instant access to a global network that will foster greater innovation and collaboration.’

Othman Aljeda, CEO of Aramex Asia, said the acquisition would deliver significant competitive advantages for both companies, for customers and for Fastway’s franchisees. ‘New Zealand and Australia are two of the most rapidly growing e-commerce markets in the region and by acquiring Fastway we can serve more businesses and consumers online and through our strengthened distribution network. Having scalable synergies with our own infrastructure and extending our reach across the region, the acquisition now makes us present in New Zealand for the first time and strengthens our existing operations in Australia. Enhancing and expanding our operations in the region also allows us to further contribute to the development of Asia-Pacific’s e-commerce sector and facilitate cross-border trade.’

What does it mean for franchisees?

According to Bruce Speers, Group Managing Director of Fastway Limited, ‘This is an exciting evolution for Fastway and our franchisees which will deliver the benefits of a global network, reinforce our leadership position, and further strengthen our ability to invest in the tools and technology we need to continue to grow and deliver for our franchisees, our customers, our business partners and the Fastway network.’

‘Fastway is very proud that from humble beginnings, we’ve grown into a globally-franchised courier company. The acquisition of our company by a major multi-national of the calibre of Aramex is a clear demonstration of the success that New Zealand businesses can achieve on a global stage. It’s a major endorsement for New Zealand know-how.’

As always when a franchise changes hands, there will be some uncertainty among franchisees as to what this means for the future of their investments, Aramex does have some franchised operations in its stable, and it seems possible that the acquisition of the multi-award winning Fastway will provide additional franchise expertise to the group.

Scott Jenyns, the CEO Fastway Couriers New Zealand, says that the company has contacted all its franchisees and staff with the following information:

What does this mean for my Regional Franchise?

It will be business as usual for regional franchisees. This is an exciting evolution for Fastway and our franchisees which will deliver the benefits of a global network, reinforce our leadership position, and further strengthen our ability to invest in the tools and technology we need to continue to grow and deliver for our franchisees, our customers, our business partners and the Fastway network.

At the highest level you can expect two things from us: a commitment to maintain business continuity and open and transparent communication from us. We’ll communicate with you at appropriate times throughout the transition process with updates. We also highly value your input and encourage you to get back to us with any questions you may have. In addition to our normal communication channels, we’ve set up a dedicated email for any questions you might have.

This is a really proud day for our business – we’ve come a long way from our start in Napier in 1983. We’ve achieved a lot in those 30+ years and this acquisition by one of the world’s leading providers of logistics and transportation solutions is powerful reinforcement of the calibre of the Fastway business and network.

What are the benefits of new ownership for Regional Franchisees?

While we’ll have a new ownership structure for our parent company, Fastway Limited, our focus will remain on supporting and growing your business. This transaction also means we’re better placed to continually invest in the tools, technology, training and profiling necessary to further grow our business and yours, particularly in the e-commerce market and the rapidly expanding online shopping market.

The e-commerce industry is expected to be a major growth driver for the courier and parcel deliver services industry in the future and we’ll be better positioned to take advantage of these opportunities.

Additionally, this acquisition delivers a real competitive advantage for you and for us in becoming part of a truly global network.

How will the new ownership structure work under Aramex?

Aramex is excited to be supporting our franchisees grow business through greater efficiencies, productivity and reach and access to a global network that will foster greater innovation and collaboration.

This is an exciting time for our Regional Franchisees. It’s a major tick of approval (from a global player Aramex) for Fastway’s long-standing and successful franchisee model and a solid belief in Fastway’s management team and approach.

Aramex believes in the Fastway business and approach and looks forward to working with our management team and with you to grow Fastway within the New Zealand and Australian markets. They also look forward to working with us to support you and our Courier Franchisees in continuing to build our reputation for leadership and customer service excellence.

What will this mean for Fastway’s management team?

Fastway’s management team will continue to drive the success of the network in New Zealand and Australia and provide support for you and your business.

Brem Ellingham is taking the opportunity to retire from the business after 18 years with Fastway and Bruce Speers has been appointed as Group Managing Director, supported by Scott Jenyns and Richard Thame as CEOs of New Zealand and Australia respectively. As you know, these individuals bring considerable expertise and knowledge to the table which Aramex is looking to reflect across the global network.

Are there plans to consolidate the number, or reduce the number of franchise partners across the network?

Fastway Couriers was launched by founder Bill McGowan in 1983. He chose Hawkes Bay as the place to launch his straightforward service because it had two significant cities a short distance apart, meaning a steady stream of parcels needed to be delivered from one to the other.

‘Recognising that no one wants to do business with a courier who has no work, I would fill up the van with empty boxes and run from one business to the next with an empty box under my arm, giving the illusion of being a very busy courier,’ he told Franchise New Zealand in 2005. I called on the same businesses twice every day, dropping off flyers and asking them about their courier requirements, thus building a rapport with them. By the end of a month I had built up a core client base and then put a courier franchisee or driver into the run while I set about building up the next one.’

‘During the first year I established 12 courier runs in this manner (six franchised and six company drivers). The benefits of franchising were immediately obvious with the franchised couriers. They quickly realised that this was their own business operation and they actively looked for new business. As you would expect, their productivity levels were consistently higher than the company drivers. Couriers now had the desired incentive to build their business, as they earned on their own performance factor, and it also freed up working capital. These observations proved that franchising was the right model for the Fastway concept.’

The company went on to win franchise awards on both sides of the Tasman, winning its first in New Zealand in 1995 and its most recent in November last year. The company has also expanded operationa, launching Fastway Post when the postal service became deregulated, Fastway Print and, last year, Parcel Connect. 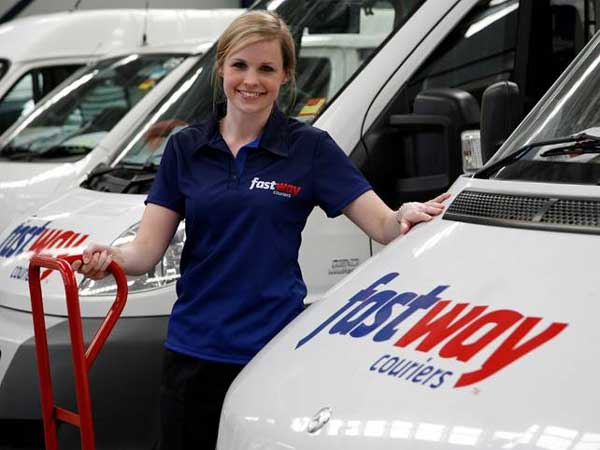 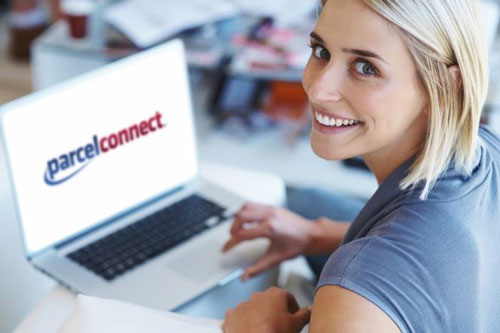 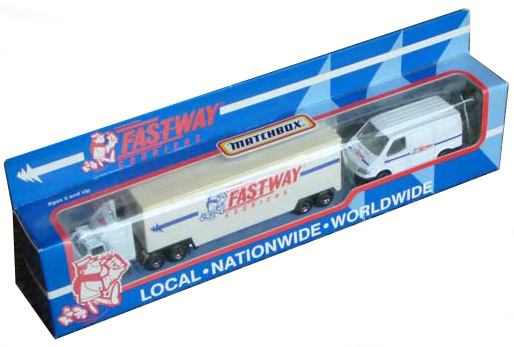 The original Fastway look - a specially-commissioned Matchbox set of vehicles.
Previous Next