It is with great sadness that we have to report that one of the pioneers of New Zealand franchising, Colin Taylor, has passed away at the age of 85.

Colin Taylor and his wife Lynn were the founders of Stirling Sports, which they grew from a single store in Dominion Road in 1964 to a retail network of 52 outlets covering pretty much the whole of New Zealand. They brought up their four children in the flat above the original shop, and later turned the family home into the offices for the franchise.

Although Colin cheerfully admitted that his original interest in franchising was as a way of reducing the number of items that used to walk out of his stores in the pockets of staff, he soon discovered that it offered other advantages too. With the concept little known in New Zealand in the early 1980s, he travelled widely to understand what he needed to do to build a sustainable franchise network, and he willingly shared what he had learned with others. He was immensely proud when Stirling Sports was named the inaugural New Zealand Franchise System of the Year in 1995.

As one of the prime movers in th 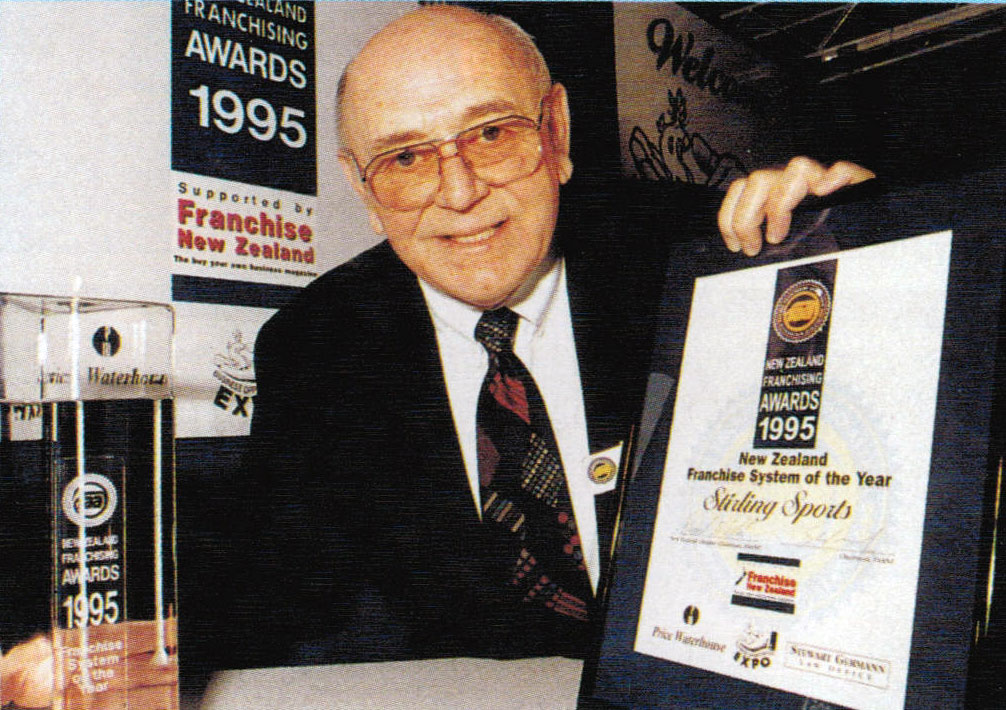 e group that was to become first the New Zealand Chapter of the Franchise Association of Australasia, and later the Franchise Association of New Zealand, he helped to create an infrastructure locally from which everyone who followed would benefit. The success of franchising in New Zealand, and its status as the most franchised country in the world, owes much to the efforts of Colin and his fellow pioneers and he richly deserved his status as the first Life Member of the Association.

On a personal note, when I first arrived in New Zealand Colin was one of the first people I met in the franchise sector and found him extraordinarily generous with both his time and his expertise. I will always recall him pulling out some Stirling Sports file to illustrate a point he was making and showing me detailed sales figures for various stores. I was flattered that he trusted me enough to share them with me and asked him if he wasn’t concerned about confidentiality. ‘Not really,’ he said. ‘A franchise isn’t made up of statistics, it’s made up of people.’ It was a philosophy he lived by, and there are many tales of his generosity and concern to ensure that both staff and franchisees made the most of the opportunities he created.

Colin was involved in many activities outside franchising and was also a keen art collector ­– a passion he discovered through his previous business running a motorcycle repair shop.  ‘We had a regular customer who never had any money to pay his bills so he used to pay in paintings, instead,’ Colin told me. The customer’s name? Colin McCahon. It was typical of Colin that he should both support a struggling artist and recognise outstanding talent when he saw it.

Everyone who knew him will have their own memories of Colin, and we invite you to share anything you would like to in the comments box below. New Zealand, and the world of franchising, is poorer for his passing and we send our heartfelt condolences to Lynn and the family.

A service for Colin will be held in the Newmarket Room, Ellerslie Event Centre, 80 Ascot Ave, Remuera, Auckland on Saturday 19th July at 1pm.

With typical generosity, Colin Taylor contributed a number of articles to Franchise New Zealand over the years, which always arrived hand-written in the style his friends and colleagues all knew so well. Here's one on the advantages of franchises over buying groups.