Statistics NZ released today the first Gross Domestic Product (GDP) figures for 15 regions across New Zealand. The figures, which cover the 2007-2010 period, provide a base for analysis of future statistics which will prove valuable for New Zealand franchisors and those looking to enter the country from overseas. Overseas franchisors, especially, often find it hard to get to grips with the dynamics of New Zealand’s small and often dispersed population and may miss opportunities outside the major cities.

They might therefore be surprised to read that, in the period covered by this first report, the largest increases in GDP were experienced by Taranaki, Southland, and the West Coast. Although Auckland was responsible for over one-third of the country’s economic production, its contribution to national GDP actually fell over the period in percentage terms.

‘The increase in economic activity over the period was mainly centred in rural regions, reflecting a strong period for the primary industries,’ said regional statistics manager Peter Gardiner. ‘Manufacturing slowed in 2009, contributing less to GDP in urban regions.’ 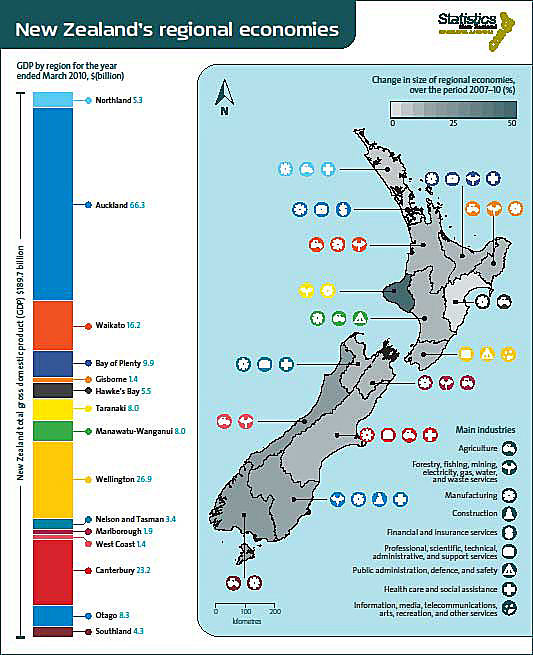 Taranaki’s economy increased 46.9 percent in size over the four years, the largest increase for any region, due to expansion in oil and gas production. Supporting industries such as construction and manufacturing also increased from 2007 to 2010.

The West Coast and Southland economies also increased in size substantially, 23.8 percent and 23.3 percent, respectively. This increase was driven by dairy farming, which lifted the South Island’s overall contribution to national GDP by 0.6 percentage points to 22.3 percent.

The economic slowdown in 2009 had a broad impact on Auckland’s industries, especially manufacturing and distribution. Between 2007 and 2010, Auckland’s contribution to national GDP fell 1.3 percentage points to 35.0 percent.

Wellington’s economy contributed 14.2 percent to national GDP in 2010, with the public administration, and professional and business service industries sustaining the region’s economy over the economic slowdown. Canterbury was the third-largest regional economy, contributing 12.2 percent to national GDP (the report period pre-dated the earthquakes).