Club Physical – the dangers of WARRING IN PUBLIC

28 February 2013 - The dispute between the Club Physical franchisor and a multiple franchisee has attracted a lot of media interest. What are the implications?

The battle between Club Physical franchisors Paul and Tina Richards and defaulting franchisee Stuart Holder continues to make headlines in the general media. The issue is clearly a significant one for the franchise, as three of its nine outlets were rebranded by Mr Holder as independent outlets under the name Jolt Fitness and their members transferred to the new brand, apparently without the members being asked for their assent. 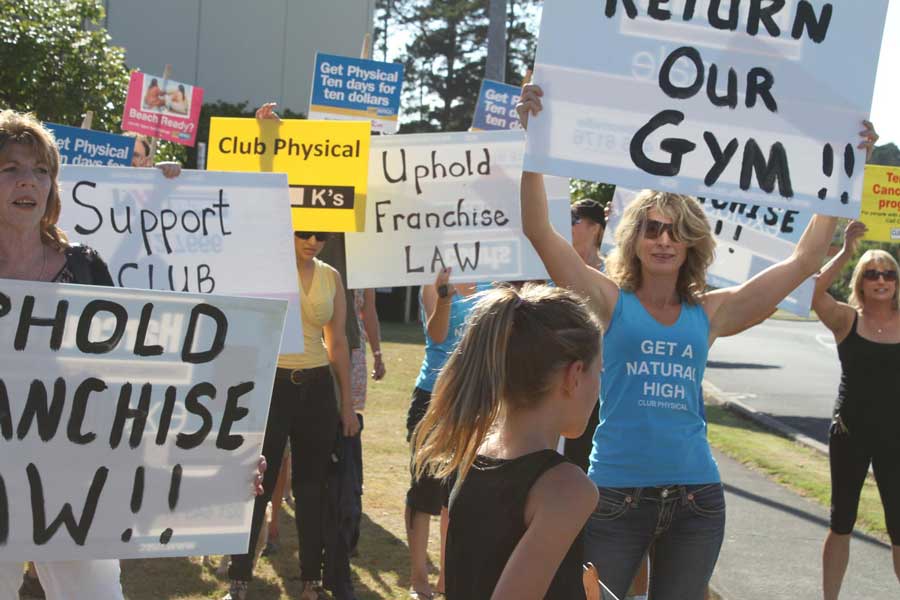 Unusually for a franchise dispute, this one has been publicised by the franchisors, who have used media releases and Facebook to promote their version of events while the Court decides whether or not an injunction should be issued to prevent Mr Holder from trading under the new name of Jolt Fitness. The latest press release from the franchisor is headed ‘Members get physical about broken agreement’ and includes a photograph of a demonstration by Club Physical members outside the rebranded gym at Auckland’s Westgate Centre (see right). It is not apparent how many people were involved in the demonstration, although several of the banners are in similar handwriting.

Mr Holder has not spoken to the media to give his side of the issue, and both he and his franchise lawyer, the normally media-friendly Stewart Germann, made no comment to a reporter from TV3’s Campbell Live. However, according to the New Zealand Herald’s report of the injunction hearing, Mr Holder felt he was not receiving sufficient business support from the franchisor in order to stave off competition. A further point of contention was the type of marketing material being produced by Club Physical, including an advertisement which showed aliens shooting fat people with the slogan ‘Get the fat people first.’

Phillip Rice, the lawyer for the franchisor, countered that Mr Holder had bought the three gyms over several years, suggesting that he was happy with the business, and had then cancelled the agreements at the same time as franchise fees - which had been waived for the first two years - became payable. He suggested, ‘The evidence shows there was clearly a predetermined plan here to acquire several franchises and at the opportune moment, terminate on some pretext.’

A decision on the injunction application is due to be released early next week. In the interim, however, the Executive Director of the Franchise Association has been quoted as saying that the case has global implications. Graham Billings told the Australian Leisure Management website that ‘it was his hope that courts would uphold the principle of franchising contracts as a legal document and that people shouldn’t break them.’ Club Physical is not a member of the Association.

The idea that the case might have global implications seems a little extreme, as this is hardly the first time that a disgruntled franchisee has taken down the signs and re-branded as an independent following a dispute. Most such cases come down to the terms of the individual contracts and the proven breaches or otherwise of obligations by both parties. In this case, those facts have still to be determined and, whether an injunction is granted or not, a full resolution is still some way away.

The danger of playing this particular case out in the media is that, whatever the outcome, it will be seen as having implications for franchising as a whole, not just for Club Physical. Some of the banners pictured at the demonstration bore the phrase ‘Uphold franchise law’. There is, of course, no such thing as franchise law in New Zealand; franchise agreements are subject to the same commercial law as any other. But if Club Physical were ultimately to lose this case because of issues specific to their particular contract or operation, it would now be seen by the general media as meaning that franchise agreements in general are unenforceable. If that impression – however untrue – were to gain ground, it could cause a lot of disruption if franchisees think that they are no longer bound by their contracts. That is not likely to be the case – and the only winners will be the lawyers.

Incidentally, this is not the first time that Club Physical’s Paul Richards has turned to social media to publicise an issue. In June 2011, he posted a video on YouTube of CCTV footage showing equipment being removed overnight from another Auckland outlet when a franchisee placed her business into receivership, leaving the franchisor with a rent bill and empty premises. The footage was then removed for legal reasons.