9 September 2012 - Dunedin-based franchise Crest Commercial Cleaning has launched a campaign aimed at forcing a decision on uncertainty in the Employment Relations Act.

According to an advertisement placed by Crest in today’s NBR, ‘Wrangles in the Employment Court over Part 6A of the Employment Relations Act are hurting both employees and employers. Employees are being treated like pawns in a chess game, offloaded to another employer without proper agreements being disclosed or redundancies being sorted out.’

The $1 billion commercial cleaning industry in New Zealand is a highly competitive one and franchises such as Crest have become major players in the sector. One of the reasons why franchising works as a business format is because the franchisor appoints franchisees who are carefully selected for their ability to meet the required standards. However, if the franchise wins an existing cleaning contract from another operator, it may be forced to employ the very people who have been doing an unsatisfactory job.

Crest says that under the existing interpretation of the Act, ‘An incoming contractor is forced to take on employees from an outgoing contractor, despite sometimes being the reason why the contract was lost in the first place. The result is an unhappy employer and upset employee being shunted between companies.’ 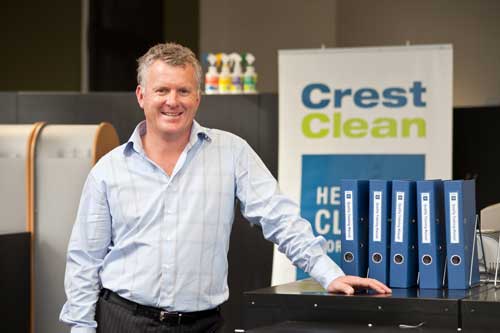 Grant McLauchlan, Managing Director of Crest Commercial Cleaning, says, ‘As a direct result of the poorly drafted, ill-targeted and unworkable nature of Part 6A of the Employment Relations Act, New Zealand businesses now risk being in breach of the law and face thousands of dollars in penalties from Employment Court decisions.’

A report on growing unrest over the issue is currently before the Minister of Labour, the Hon Kate Wilkinson. Crest says, ‘The Minister knows the law is a mess and even has a report on her desk telling her employees and employers are not happy. Schools, universities and businesses are unhappy and are suffering. But she cannot seem to make a decision. We want the Minister to make a decision on Part 6A of the ERA.’

Crest has created a website at www.vulnerableminister.co.nz to draw further attention to its campaign.

Rare move for franchise to campaign

Apart from companies such as The Body Shop, which made their reputation partly through aggressive environmental and human or animal rights campaigning, it is quite unusual for franchises to be involved in campaigns of a political nature. The Body Shop made it work because new franchisees joining the company were expecting to understand and share its ideals.

Generally, though, franchises operate in the mainstream and franchisees are rarely sufficiently united in their opinions to make it possible or desirable to take a public stance on political issues. For Crest to stick its head above the parapet so openly on this occasion reflects the importance it attaches to a long-running issue and its frustration at the apparent lack of action by the responsible Minister.