IMMIGRATION ADVISORS – what should you believe?

October 2011 - Tammy Bell, an expert on settlement and migration in New Zealand from the move2nz website, suggests that some immigration advisors are scaremongering for their own financial gain

This article is reproduced with permission from the move2nz website for the benefit of Franchise New Zealand readers who are contemplating immigrating to NZ and buying a business.

Recently I have been researching immigration advisors, the number of migrants using them and how they promote their services. What I have seen has seriously worried me, prompting me to write this special report. On many licensed immigration advisors’ websites are statements literally scaremongering for financial gain.

One of the main reasons move2nz was set up was to ensure migrants had good unbiased information from a source which didn’t have a commercial interest in them. This article is intended to stop unethical businesses pulling the wool over your eyes.

Immigration advisor licensing was introduced in May 2008 to provide protection for vulnerable migrants against fraudulent, corrupt and unethical advisors. The Immigration Advisors Authority was created to license and police advisors and, as part of this, introduced a Code of Conduct for licensed advisors.

Now licensed advisors know about this and the IAA has been reminding them of their responsibilities – as recently as July this year sent out a reminder to all advisors:

“that a licensed advisor must not, in a false, fraudulent or deceptive manner, misrepresent or promote himself or herself, or his or her company.”

“To ensure that you meet your obligations under the code, you should regularly review your advertising and company website to ensure that the information is up to date and accurate.”

What my research shows is that this message is not getting through to some licensed advisors who appear to be actively misleading potential clients to create fear and increase business.

Here are some examples taken this week from immigration advisor websites: 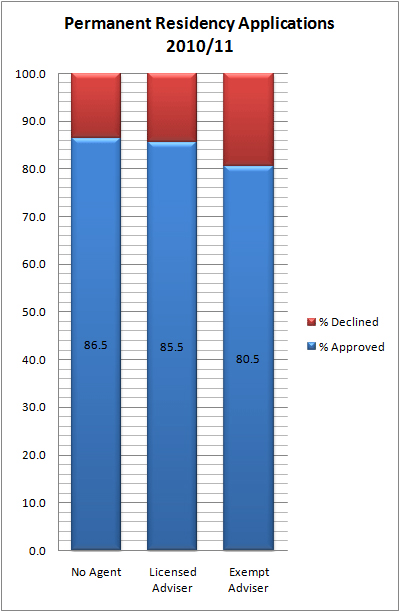 1) “Did you know that up to 30 to 50% of non-agent assisted online and DIY applications FAIL?”

Wrong – in 2010/11 only 13.5 percent of non-agent assisted DIY applications failed, and in 2009/10 it was just 12 percent. See below how this compares to agent-assisted applications ­– the results might surprise you.

So last year most people (across all streams) entered their application without the help of an agent and this group had the highest rate of success.

Now, to be fair many licensed advisors specialise in dealing with complex and difficult cases and the success rate of simple cases will always be higher than for the really difficult ones. However this does raise questions about many advisors who claim a 97% or better success rate.

One of the issues which has been highlighted through this research is that there is another group with a much lower success rate than either DIY applicants or those using an advisor:
exempt people.

These include, among others, family members, lawyers, MPs and Citizen’s Advice staff. Nearly one in five of these applications (19.5% in 2010/11) failed and that is something that needs looking into!

2) “What the public do not have access to are the extensive Operational Manuals made available by the Immigration Services to migration consultants.”

Wrong – the Immigration department’s Operations Manual is freely available to all, you can search through it here, but you might not know that without sources of information like move2nz.

3) “At a recent meeting with Immigration New Zealand staff in Auckland one of the Branch Managers told us that 98% of Family Visa applications are incorrect, with more than half being rejected straight away because of this.”

I can’t comment on what was said in the meeting, but these details are clearly wrong as in 2010/11 over 92 percent of all applications lodged in the Family Category were approved!

Again, the majority of applicants did not use a licensed advisor and those not using an advisor had a higher rate of success.

My reply to the claims being made by these advisors (and please excuse my language) is, “Total BOLLOCKS”.

Getting to the truth

Searching through immigration statistics is not for everyone, but it’s something (my husband and business partner) Mike and I have got used to and now do a lot. I hope what we have discovered – that some licensed immigration advisors create a false impression of your chances of a successful application to line their own pockets – will give you food for thought before parting with your hard-earned cash.

Now, I have to reiterate that not all licensed advisors make false claims. In my opinion, there are good ones out there and on complex cases (eg. business visas, instances where applicants have a weakness in their application that needs to be argued, and situations where the immigration department has made a ruling you disagree with) it really pays to have a professional fighting your corner.

The vast majority of applicants however have simple applications – either you qualify or you don’t. Apart from checking with a professional if you are worried about something, in my opinion very few of these applicants benefit from using a professional advisor – as confirmed in official government statistics.

Making a difference: what can we do about this??

Seeing this rubbish being flouted on advisors websites, Mike and I really wanted to do something about it – move2nz ,after all, is about making a difference. So Mike wrote to the IAA on 11th September 2011 to ask about this problem, worried that if licensed advisors got caught doing this they would just get a slap on the wrist and be told to correct it.

We were impressed to get a fast and clear reply back the following day confirming:

“If you have concerns about a licensed advisor and consider that they are misrepresenting themselves, their business, their clients’ immigration opportunities or NZ’s immigration requirements then this may be a breach of the Code of Conduct and grounds for a complaint to be referred to the Immigration Advisors Complaints and Disciplinary Tribunal.”

The email confirmed that the IAA do not mediate in matters like this; instead the IAA refer cases to the Disciplinary Tribunal which acts like a court to assess the problem and if necessary punish the advisor. This is a much better situation than we expected.

Following a link kindly provided by the IAA we confirmed that in fact one case has already been heard by the Tribunal. Deng, a licensed advisor, falsely claimed she had a Master of Business Administration degree. The advisor was found guilty of a breach of the code of conduct, her licence was cancelled and she was ordered to pay $1,500.

Now this is a real result and something we would like to see more of!

The bad news is that we have uncovered licensed immigration advisors misleading the public to build fear in order to raise profits.

The good news is that we have also come to realise that there are laws in place to stop this.

You can make a difference and so can we. If you see a licensed advisor making a claim you know (or believe) to be false you know what to do – make a complaint to the IAA (just fill in the form here) and take the unethical advisors out of the industry.

move2nz.com is a free website that combines straight, unbiased information with a welcoming community including thousands of families already living and working in New Zealand. It was voted New Zealand's Best Community Website in 2008 and 2009. This article is reproduced with permission and remains copyright move2nz.com.